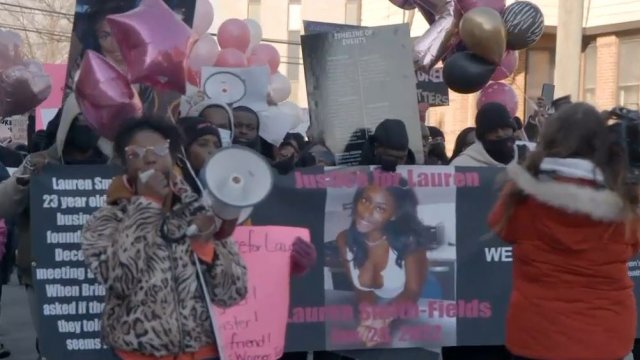 Smith-Fields was found unresponsive in her apartment in Bridgeport, Connecticut, on Dec. 12 by a man she met through the dating app Bumble.

The family of Lauren Smith-Fields, a 23-year-old Black woman, tells Newsy that they want nothing more than justice right now for her death. They say they believe race played a role in how the Bridgeport, Connecticut, police department has been handling Smith-Fields' death investigation. Now they plan to sue the city.

Dozens of people — relatives, friends and members of the community — marched, chanting and pressuring the city. They insist on a proper death investigation. The woman was found unresponsive in her apartment on Dec. 12 by a man she met through the dating app Bumble, the family says because that man is White, police have not named him a person of interest in her death.

"I want them to give us answers and don't discard us like we're rubbish, and moving forward, I want Detective Cronin to be fired, I mean this whole police force, from the top to the bottom, needs to be revamped," Smith-Fields' mother, Shantell Fields, tells Newsy.

The family claims her death occurred under mysterious circumstances. They claimed they found out about the young woman's death from her landlord, who informed them over 24 hours later, and according to them, the police did not call.

Darnell Crosland the family's attorney, alleges the family was told by a detective in the case to stop calling to inquire about the investigation.

"How do you tell a family stop calling? "Don't call me anymore.' And make us wait for almost two hours and never show up? Yeah, I want his badge," Fields says.

Crosland said the family intends to sue the city, and added that he requested a motion for Bumble to release any communication between Smith-Fields and the man she met at her apartment.

"Bumble, we're not noticing them of a lawsuit, but we are questioning as to whether they knew of any signs from this gentleman that he might have been a danger and they didn't do something to protect Lauren," Crosland explained.

According to police, the man said he went to the woman's apartment, they drank tequila, played some games, watched movies, and then went to sleep. He said he woke up the next day at 6:30 a.m. and Smith-Fields was on her right side. He alleges blood was coming from her nose onto the bed and she was not breathing. He told police that was when he called 911. Lauren Smith-Fields would have turned 24 years old Sunday.