Smartphones In Bedrooms May Cause Kids To Get Less Sleep 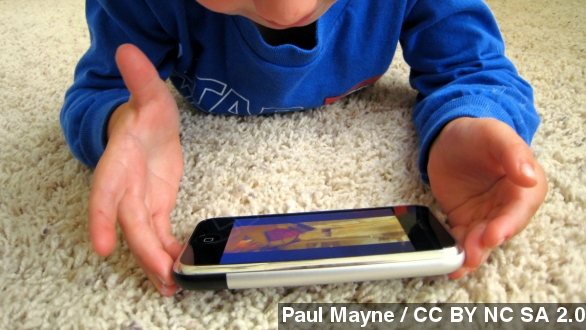 SMS
Smartphones In Bedrooms May Cause Kids To Get Less Sleep

By Matt Moreno
January 6, 2015
A study from the University of California, Berkeley, says kids reported, on average, about 20 fewer minutes of sleep.
SHOW TRANSCRIPT

If your kids are heading to bed, you may want to have them put their smartphones to sleep, too ... in a completely different room.

That's according to a new study published Monday in Pediatrics that says kids who have access to small screen devices like smartphones in their bedrooms tend to get less sleep than those who don't.

The University of California, Berkeley study looked at more than 2,000 fourth- and seventh-graders. What it found was kids who had small screen devices got, on average, 20.6 fewer minutes of sleep than those who didn't. In addition, kids with TVs in their rooms got about 18 minutes less sleep.

Those sleeping near smartphones also complained about the quality of their sleep more than others. All of this may factor into why some parents opt to enforce the "no screens in the bedroom" rule for their kids.

Even late-Apple CEO Steve Jobs said he limited his kids' exposure to screens.

While this latest study also looked at TV usage with kids, it focused mainly on the use of smartphones on kids' sleep. Lead author, Jennifer Falbe, said "Much less is known about new forms of media, like smartphones ... [They] have the potential to impact sleep, perhaps to a greater degree than traditional media."

This study, along with ones before it, have caused an NPR writer to take action. "Though I don't think my sixth-grader is texting at midnight, I've been worried enough about the disruptive potential of the bedside device that this Christmas she got an old-school bit of technology — a clock radio. That iPod is outta there."

The researchers say what types of media or other factors causing the lack of sleep and disturbances may be explored in further studies.