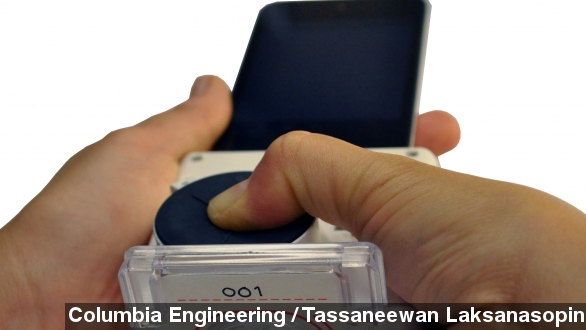 SMS
Smartphone App Can Detect HIV, Syphilis In 15 Minutes
By Matt Moreno
By Matt Moreno
February 5, 2015
Researchers at Columbia University say a $34 dongle and smartphone app can help detect the diseases and share the information with doctors.
SHOW TRANSCRIPT

We don't suggest you skip your next doctor's appointment, but researchers have found a new way to detect HIV and syphilis in just 15 minutes — from your home.

From anywhere, actually. Researchers at Columbia University's Engineering School have developed a new smartphone app that can detect HIV and syphilis with a finger prick.

The researchers came up with a dongle — an accessory that attaches to your smartphone or computer — that uses an enzyme-linked immunosorbent assay (ELISA). ELISA is basically a test used to detect antigens — proteins the viruses produce — in the body. (Video via  YouTube | Biology / Medicine Animations HD)

The dongle costs just $34. That's much cheaper than similar ELISA lab equipment that can cost upwards of $18,450 by researchers' estimates. (Video via Food and Agriculture Organization of the UN)

The app has already been tested by the researchers in Rwanda. The country has long struggled with HIV and mother-to-child transmission rates of the disease are high. (Video via UK Department for International Development)

In addition to being cheaper, quick, and convenient, using a smartphone app is also helping doctors and researchers learn more about the diseases and patients.

The smartphone test allows patients to upload the information to the cloud and automatically update medical records — providing doctors up-to-the-minute information from patients all over the world. (Video via YouTube / drchrono)

Lead researcher Samuel K. Sia said, "Coupling microfluidics with recent advances in consumer electronics can make certain lab-based diagnostics accessible to almost any population with access to smartphones. This kind of capability can transform how health care services are delivered around the world."