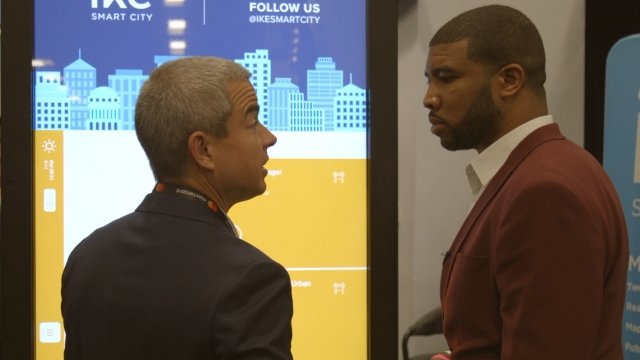 Cities around the world are beginning to use tech in ways that we used to only see in sci-fi movies. Those "smart cities" are using that tech to create better services, operate more efficiently and increase public safety. Tech just like IKE, or the Interactive Kiosk Experience.

Pete Scantland is the CEO of the company that has orchestrated this little experience. It's essentially a huge iPad with different applications to see what shops, hotels and restaurants are nearby.

It can also count how many pedestrians are walking by, so developers and the city will know whether or not a certain corner is a good place for a coffee shop or a DMV, for instance. When IKE first launched, that was essentially it. But that's expanded since.

"What we've really been focusing on lately is, is this concept of social equity. What we're doing is we're pulling jobs that are closest to this IKE location … and you can filter by category. And what we're doing is pulling in a real time feed and allowing folks to understand what's available in the area, learn about the job and then they can actually apply to it," Scantland told Newsy.

Not only can you apply for jobs, there’s even a section where people can find the nearest homeless shelter and find out how many beds they have available at that moment. 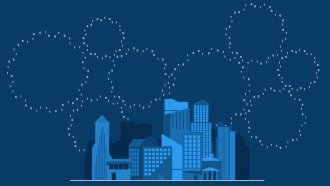 If you're like me, you're probably thinking "this sounds crazy expensive to install and keep up." But Scantland says it's actually free for cities that want them.

"We put them in; we make the investment in the capital expense, in the operational expense and we generate revenue through sponsorship and advertising," Scantland said.

There are a couple of obvious questions and concerns people have about those kiosks. Is IKE collecting and keeping their data? And if so, is that data safe?

"Our business model is very straight forward. We're monetizing the system through the sale of the advertising and sponsorship not through the sale of people's data," Scantland said. "If someone wanted to transfer something from this to their phone which is something that we allow. We don't store phone numbers  or any other personally identifiable information."

IKEs are already up all over Denver, Colorado and Scantand says around ten other cities will be getting their own kiosks over the next year.