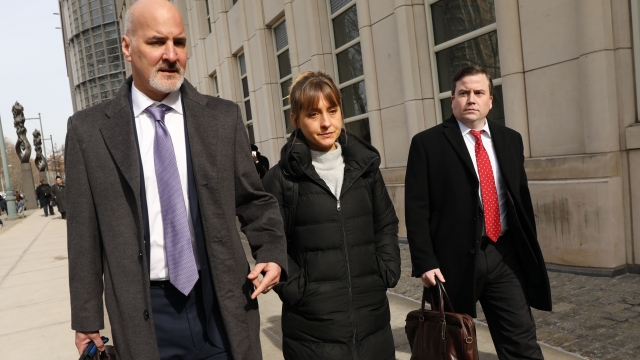 "Smallville" actress Allison Mack pleaded guilty to racketeering and racketeering conspiracy charges on Monday. The charges were connected to Mack's involvement with a group The New York Times calls "cultlike," as well as its program that targeted actresses. Mack cried as she apologized to her victims in court.

Federal prosecutors say female members of Nxivm were branded in their pelvic areas with the initials of the group's leader, Keith Raniere, and forced to have sex with him.

According to U.S. Attorney Richard P. Donoghue, women were exploited "both sexually and for their labor, to the defendant's benefit."

Mack was arrested in April 2018 and pleaded not guilty to charges including sex trafficking and conspiracy of sex trafficking and forced labor. She has since admitted she lied to women to get them to join Nxivm. She says she told potential recruits it was a "female mentorship group" in order to entice them.

Group leaders had access to explicit photos and videos of potential recruits and group members, as well as rights to their property, that they allegedly used to blackmail the women into silence. Members were reportedly referred to as "slaves" until they started recruiting others and became "masters."

Mack says her relationship with Raniere started with him mentoring her in acting, and as time went by, she came to believe Nxivm was beneficial. She says she pleaded guilty Monday after "self-examination."

Mack could face up to 20 years for each count she's pleaded guilty to, or a maximum of 40 years in prison. She'll be sentenced in early September.