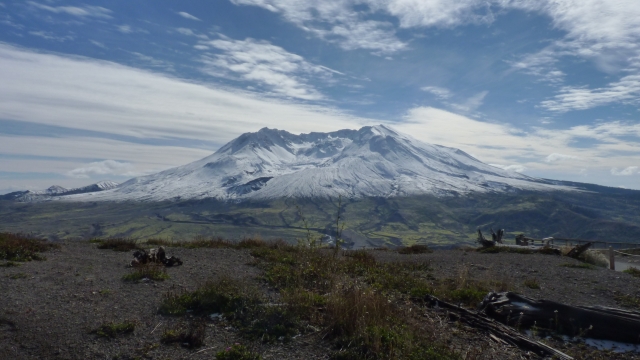 SMS
Small Earthquakes Are Shaking The Dormant Mount St. Helens
By Ethan Weston
By Ethan Weston
May 7, 2016
Over the past eight weeks, more than 130 small quakes have been detected under the sleeping volcano.
SHOW TRANSCRIPT

Mount St. Helens — dormant since 2008 — seems to be rumbling. The U.S. Geological Survey says more than 130 small earthquakes have been detected under the volcano in the past eight weeks.

None of the earthquakes have been very big — the largest was a 1.3 on the Richter scale — and they've all been at least a mile below the surface, meaning people probably didn't feel them.

But for those who study volcanoes, this swarm of activity indicates Mount St. Helens is recharging. In other words, new magma is refilling the volcano's chamber.

In 1980, an explosive eruption blew the top off the mountain, killing 57 people, and the hot ash sparked forest fires.

A repeat of that isn't likely this time. In fact, there were larger earthquake swarms in the early and late 1990s, which didn't lead to anything severe. There are also none of the usual indications of imminent eruptions like irregular gas release or ground inflation.

And the last time Mount St. Helens erupted in 2004, it wasn't nearly as violent. The USGS says it can take years for magma recharge to reach a point that it causes an erruption.

This video includes clips from U.S. Geological Survey and Smithsonian Insitution and images from gfpeck / CC BY ND 2.0 and Jess Wood / CC BY 2.0.