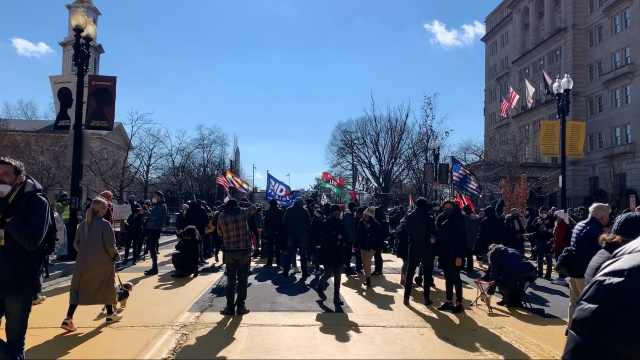 SMS
Small Crowd Of Biden-Harris Supporters Gathers At BLM Plaza
By Kellan Howell
By Kellan Howell
January 20, 2021
Despite COVID concerns and the shadow of the Capitol riot, supporters gathered to witness the historic event.
SHOW TRANSCRIPT

I'm Kellan Howell, and I'm standing about a block away from the White House in what is now called Black Lives Matter Plaza, where, despite the fact that D.C. is pretty much shut down for President Joe Biden’s inauguration, a small crowd of people have gathered to listen to his inaugural address.

“I think that the past four years has motivated me for one,” said Lisa Ford, who traveled from San Diego. “And I always knew once we got into this home stretch of getting rid of Donald Trump that I would want to be here in that moment.”

“Despite the fact that we are not as close as we may have wanted to be, we've still met a lot of really great people who are just as excited to be here today,” said Emma Ford, who traveled from San Diego.

“We wanted to come out here because there was just something historic,” said Alan Unkel from Cedar Rapids, Iowa. “And you know, this, it seems like a once in a lifetime event for us.”

“We actually booked this trip the day that Biden was announced,” said Alan Unkel. “So it was all the way back in November. And even with the COVID worries and that, once the insurrection, we definitely had buyer's remorse. We felt like we still had to come out.”

“I knew that when he chose Kamala as his running mate that I was definitely going to be here,” said Lisa Ford. “And I wanted to bring my daughter to be part of that.”