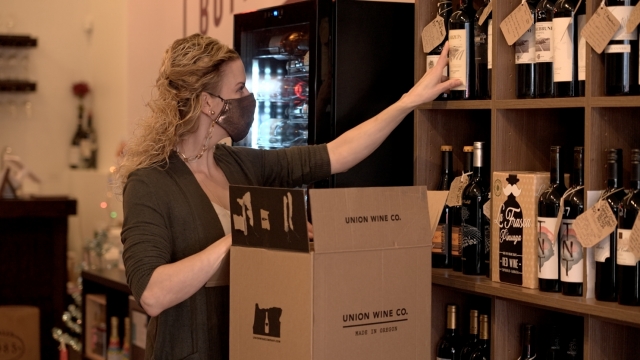 SMS
Small Businesses Face Supply Chain Problems During The Holidays
By Lauren Magarino
By Lauren Magarino
December 13, 2021
Disruptions, coupled with increased demand, send a ripple effect through the food supply chain. But not all retailers will feel its effect.

It's delivery day at BottlesUp! — a Chicago-based bottle shop.

Opening just months before the pandemic began, owner Melissa Zeman has persevered through many challenges.

With the holidays now in full swing, the challenge is getting wine from around the world on her store's shelves.

So every time I place an order, I kind of somewhat expect a rep to get back to me. 'We don't have this, but we have this.' So it's a lot of, 'if not this, then try this instead,'" Zeman said.

As for prices, she said "there definitely have been staples here that we've carried since the beginning two years and they've seen increases."

So, the cost to toast over the holidays is gonna be a bit more than we're used to. And this issue that we're seeing is also applying itself to food items. Our grocery bills, you may have noticed, have also increased.

"Right now we're in a phase of we continue to have some supply chain disruptions after the farm gate that are adding to the price of food and impacting if you can get the specific product that you want," he said. "I call this the 'the problem if you have a three-year-old,' which is, can you get chicken tenders or strips? Yes. Can you get chicken nuggets? Yeah, probably. But can you get dino chicken nuggets, which are the only ones your three-year-old will eat? That might be a little bit more of a challenge, right?"

Take Golden State Foods, a $5 billion supplier in the food service industry to more than 125,000 quick service restaurant and retail stores, including McDonald's.

"There were times during the pandemic that we saw times where we had to shut lines down because we didn't have enough staff to run the lines," he said.

"In the southeastern part of the United States, Florida had an uptick back in the early part of '21 of COVID cases that required their hospitals to need more oxygen," Morgan said.

Since nitrogen and oxygen are both extracted from air, GSF's provider started producing more oxygen rather than nitrogen.

"So that caused us to have to shuffle around and make some accommodations to run our production with less nitrogen," Morgan said.

"The part of our business that we supply to retail or to retail brands that go through grocery," Morgan said. "We've seen a sharp increase in that over the course of the pandemic."

These disruptions, coupled with increased demand, send a ripple effect through the food supply chain but not all retailers will feel its effect.

"The retailers that are going to be affected the most are the small retailers because the big retailers, they have the resources to keep their supply chain running," Abdallah said.

So, when it comes to grocery shopping, you won't see empty shelves but there may be less variety and higher price tags.