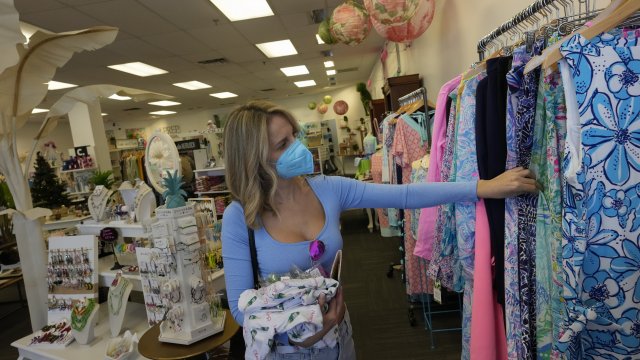 SMS
Small-Business Owners Forced To Confront New Prices With Inflation
By Bianca Facchinei
By Bianca Facchinei
March 30, 2022
Many small businesses are raising their prices to deal with inflation, but they fear it will cost them customers in an already uncertain time.

It's a question not just consumers are asking — small business owners are, too.

For Nick Johnson, the owner of Su Casa, a Baltimore home store, battling higher costs is a never-ending struggle.

“We have teams actually in place from the last year, year-and-a-half whose explicit mandate on a daily basis is to check where we are with prices. And we feel terrible about it because that’s not who we are as a company," Johnson said.

Inflation is the top concern for small businesses this quarter, named by a third of respondents in a new poll from MetLife and the U.S. Chamber of Commerce.

“One of the biggest challenges for small businesses is that, inevitably in some aspect of what they do, they compete with larger businesses who have a better ability to scale," said John Cunnison, vice president and chief investment officer of Baker Boyer Bank.

The poll also shows 67% of small businesses have raised prices.

“Our food costs since COVID have doubled, 40 to 50%," said Prit Kaur, co-owner of Urban Tandoor.

The Colorado Springs restaurant is dealing with it by adding a 5% inflation fee that can be found on the bottom of receipts. Some customers say they understand.

“If a local business needs to charge more, I support that," customer Louis Pizzi said.

But many small businesses are wary of raising prices too much and too fast out of fear of losing customers, like one boxing gym in Denver.

“If someone’s having a hard time, they speak to us, and we’ve been empathetic as well as flexible," said Michael Vaughn, general manager of Worth the Fight Boxing. "Being a small business, we can make [changes] helping people."

In Cincinnati, single mom and real estate agent Shannon Crutchfield — who can speak to both consumer and small-business-owner experiences — explains what so many Americans are feeling right now.

"I'm not sure how much longer we can as a country continue to endure these prices and these pinches when there is not an increase of wages to match it," Crutchfield said.