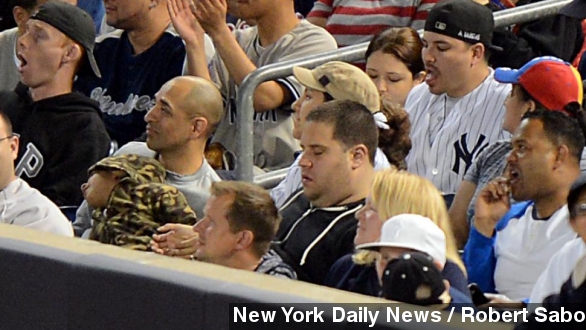 By Ben Lawson
July 7, 2014
The fan who was mocked online for snoozing at a Yankees game has filed a defamation suit, which is itself being mocked online.
SHOW TRANSCRIPT

A Yankees fan caught on camera snoozing during a game is now suing ESPN, Major League Baseball and the Yankees themselves for — get this — $10 million, all because:

"His feelings were hurt. Reflection on the game, I guess." (Via WCBS)

Slate calls the move "akin to suing the 'Kiss Cam' for sexual harassment." Twenty-six-year-old Andrew Rector fell asleep at a Yankees-Red Sox game back in April and was on the receiving end of more than a few jokes.

The suit claims the sleeping fan faced an avalanche of "disparaging words" after the announcers had some fun at his expense. The suit lists words like "stupor," "fatty" and "stupid." (Via New York State Supreme Court)

But, as Deadspin points out, the ESPN commentators John Kruk and Dan Shulman said none of those things in their broadcast. That would be those notoriously ruthless Internet users.

But if Rector wanted to avoid online defamation, maybe he should have looked up something called the Streisand effect, when trying to hide or censor something winds up making it more famous.

The lawsuit itself is now the subject of Twitter mockery. One user said it "makes me feel bad for being an attorney." And a Wall Street Journal writer tweeted "Because everybody knows the best way to stop online ridicule is to file a ridiculous lawsuit."