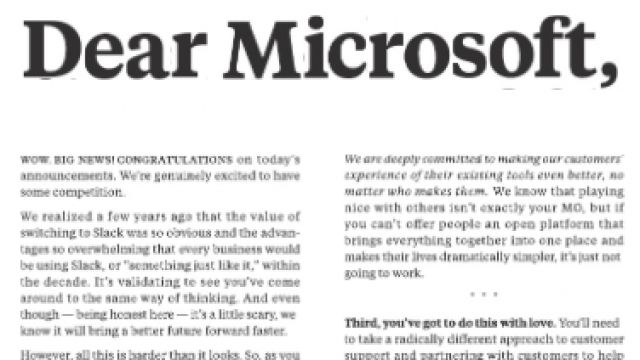 Group chat app Slack has some big competition — and it decided to acknowledge it in a very public way: A full-page ad in The New York Times.

The communication platform's ad in Wednesday's paper coincided with the launch of Microsoft's Teams.

Although the ad was billed as a friendly "welcome" with some advice for its new rival, Slack threw some serious shade.

Here are some noteworthy excerpts:

"You're not going to create something people really love by making a big list of Slack's features and simply checking those boxes."

"We know that playing nice with others isn't exactly your MO."

"Slack is here to stay. We are where work happens for millions of people around the world. .... And we're just getting started."

But can you blame Slack given that Microsoft was reportedly considering an $8 billion bid to buy the company?

Instead, the tech giant decided to create its own platform.

While the trolling approach to advertising may seem new, it's not. Slack appears to have gone back to 1981 for its inspiration.

It took a page out of Apple's book. Apple bought its own ad "welcoming" IBM's personal computers to the market.