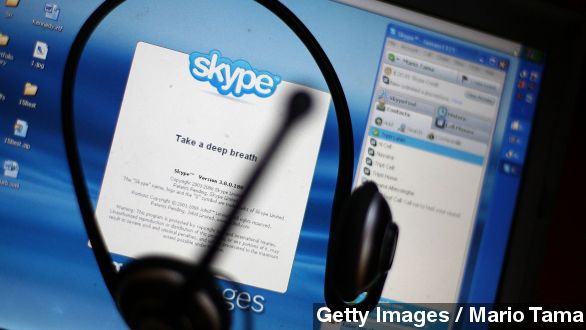 SMS
Skype's New Feature Translates Calls Instantly
By Jay Strubberg
By Jay Strubberg
December 16, 2014
Skype Translator lets users speak their native language on one end, and the software translates the dialogue instantly on the other side of the call.
SHOW TRANSCRIPT

Language barriers be gone! Microsoft has unveiled a preview of Skype's new software that will translate your speech on video and voice calls on the spot.

That's right. With Skype Translator, you speak your native language on one end, and the software translates the dialogue instantly using a computerized voice on the other side of the call.

"This is a marvelous opportunity to add to our knowledge."
And, yes, several media outlets are drawing comparisons to the futuristic Universal Translator in "Star Trek" — and, we gotta say: the analogy is pretty dead on.

Skype's corporate vice president said in a blog post, "Skype is now removing another barrier to make it possible for people to communicate irrespective of what language they speak. ... People will no longer be hindered by geography and language."

For now, Skype Translator Preview only works with Windows 8.1, and voice and video calls are confined to translating just English and Spanish, while real-time texting is available in 40 different languages.

But fret not, Microsoft definitely plans to expand the available language pool for video chats in the near future.

Plus, Microsoft says the voice recognition software learns through user involvement. So, the more people who sign up and try it out, the smarter the program gets.

Obviously, tech writers are excited about the release. Tech Crunch says, "This could be one of the most powerful technologies ever created, if it can live up to the hype, but the real test of its worth begins now."

As IGN points out, Skype Translator is the latest software developed to help the company toward its goal of connecting people across the globe.

In November, it launched Skype for Web, which lets users spark up a Skype conversation while web browsing, playing video games and the like.

Skype Translator Preview went live Monday. You can sign up for the software on the company's website.