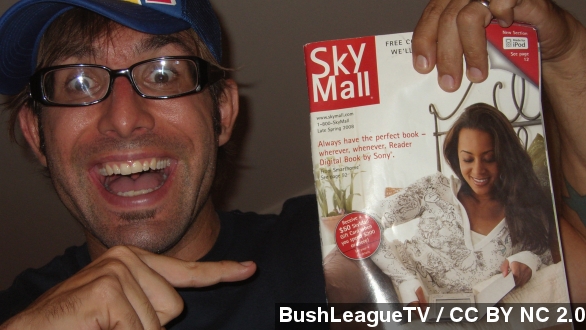 If you ever had the urge to make a purchase while cruising at 35,000 feet, this was your go-to — the always novel, ever-entertaining SkyMall catalog.

SkyMall and its parent company, Xhibit Corp., filed for Chapter 11 bankruptcy protection on Thursday, seeking a court-supervised sale of their assets.

According to CNBC, SkyMall generated nearly $34 million in revenue in 2013 but had only amassed some $15.8 million nine months into 2014.

And that drop appears to be due to a common killer of corporations — the Internet and smart devices. (Video via CNET)

Which isn’t surprising. As Digital Trends reported in 2014, in-flight Wi-Fi has become so commonplace it could eventually kill off in-flight entertainment.

SkyMall has managed to stay in business for 25 years and was reportedly reaching as many as 650 million passengers per year. (Video via YouTube / MattGCPC)

An auction for the company’s assets will reportedly be held in March, with a potential sale closing in April. After that, you might just have to look for that armadillo beverage holder you’ve been pining for on Amazon.