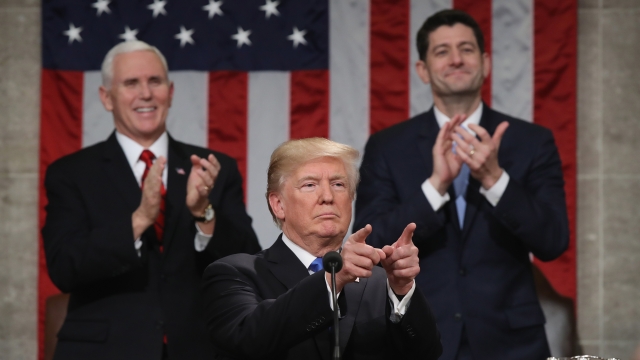 SMS
'Skutniks' And The Art Of Name-Dropping During The State Of The Union
By Casey Mendoza
By Casey Mendoza
February 4, 2019
The rhetorical device is named after Lenny Skutnik, who was praised by former President Reagan during his 1982 State of the Union address.
SHOW TRANSCRIPT

["Cindy Perry teaches second-graders to read in AmeriCorps in rural Kentucky."]["Julie represents the great enterprising spirit of America."]["Misty DeMars is a mother of two young boys."]["Corey is an all-American worker."]

If you've watched enough State of the Union addresses, you're likely familiar with this part of the speech — where the president highlights everyday citizens to make a broader point about the country. Today, it may feel tired, predictable and just part of the tradition, but it's actually fairly new.

["Lenny Skutnik, who, when he saw a woman lose her grip on the helicopter line, dived into the water and dragged her to safety."]

It all started in 1982, when then-President Ronald Reagan called out government employee Lenny Skutnik. Just two weeks before the State of the Union, Skutnik had saved the life of a plane crash victim on national television.During the president's speech, he received a standing ovation, and after that, the "Skutnik" rhetorical device became a sort of tradition.

In 2018, Politico noted you could view Skutniks in two ways: as inspirational "real-life representations of presidential priorities" or "politicized human props."If the latter sounds a little cynical, it's worth noting Reagan's own speechwriter said the tactic has been "milked to death since and overdone. I almost regret it." Similarly, Lenny Skutnik himself said in 2016 that recent speeches "get carried away with too many guests." The year before, former President Barack Obama had more than 20, and he directly named four in his speech. President Donald Trump's first State of the Union in 2018 followed suit — he directly named more than 15 of his guests.

PR expert Fraser Seitel later wrote: "Though other presidents have used the device sparingly to punctuate their remarks, never before has one used the skutnik throughout a speech to serve as an organizational framework and consistent theme."Though others might disagree, Seitel argues it was disarming, effectively emotional and, most importantly, safe.

In many ways, that safety and lack of controversy surrounding most Skutniks is the reason the rhetorical device is used so often. As predictable as they are now, they put faces to policies and remind viewers what the union actually looks like.