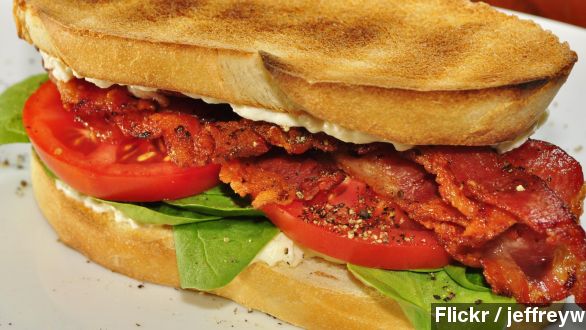 By Christine Slusser
June 11, 2014
A study published in BMJ reports there's a link between red meat and breast cancer. Not everyone agrees.
SHOW TRANSCRIPT

Red meat. It's an American diet staple. From burgers to spaghetti sauce to a medium-rare steak. (Via Flickr / Ernesto Andrade | jeffreyw | su-lin | Mike)

However, newly published research in BMJ indicates higher red meat consumption in early adulthood could cause a greater risk of breast cancer.

In 1991, 88,803 premenopausal women took a questionnaire on their diet. Researchers did 20 years of follow-up and recorded 2,830 cases of breast cancer.

And according to the study's researchers, there's a way to reduce the risk, too.

"Replacing red meat with a combination of legumes, poultry, nuts and fish may reduce the risk of breast cancer."

Wait, do we really have to give up our towering and delicious bacon sandwiches? (Via Flickr / jeffreyw)

Well, hold up. Don't start slamming down all the burgers you can find just because you feel like you'll soon be denied. The study has been met with its fair share of criticism.

Like in this article from The Guardian, where it's pointed out no previous studies could show such a "significant association between red meat intake and the disease."

BBC spoke with Professor Tim Key, who's an epidemiologist at the University of Oxford. He also didn't appear to support the study's findings:

"The US study found 'only a weak link' between eating red meat and breast cancer, which was 'not strong enough to change the existing evidence that has found no definite link between the two.'"

And even the study's lead researcher said the biological reasons behind the connection aren't clear.

"​Because this is a so-called observational study, it doesn't prove that more red meat increases breast cancer risk." (Via HealthDay)

The study still hypothesizes nixing one serving of red meat a day for a combo of legumes, poultry, fish and nuts could lower the breast cancer risk as much as 14 percent.

Well, we've always been told moderation is key. So, heck, have that bacon sandwich. Just don't have five of them.