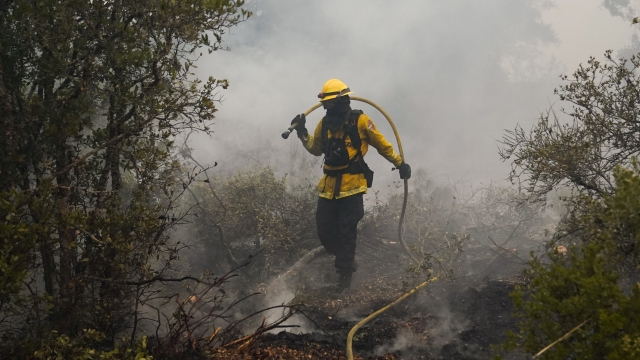 At least six people are dead and 500 homes and other structures have been destroyed as summer lightning strikes have ignited hundreds of wildfires.

"Just trying to make some firebreaks, do what we can. But with this wind and the hot spots, shoot, we could this could all be for nothing. It's just could be an exercise in futility because, you know, all it takes is one spark to jump. I mean, that house wasn't burning in half an hour ago. Neither was that."

And Gov. Gavin Newsom says this is California's reality  now. It means longer, harsher fire seasons, and increasing perils for people living near wild lands in America's most populous state.

"I'm about a mile or so away from one of over 370 wildfires that we're battling here in the state of California. We are just coming off a record week, a heat wave that led to 130-degree temperatures, a highest temperature ever recorded in California, arguably in the world's history here in our state, the hots are getting hotter. The dries are getting drier. Climate change is real. If you are in denial about climate change, come to California."

On one hand, the governor's Thursday speech, delivered to the Democratic National Convention from the fire zone, was political. He mocked President Donald Trump's claim that California's catastrophic fires were due to failure to remove "leaves and broken" trees from its forests.

But California has experienced its most destructive and deadly  wildfires in most recent years. In 2018 alone, one Northern California blaze burned 720 square miles and another destroyed the entire town of Paradise, killing 85 people.

The worst of California's current fires are burning in the central coast Santa Cruz Mountains and near its famed Napa Valley wine country.