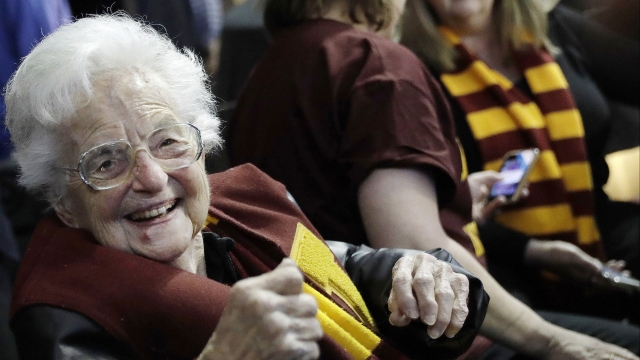 The 101-year-old has served as the Loyola-Chicago's chaplain since 1994.

A limited number of fans will be allowed at the games for March Madness. But one of college basketball's most devout and divine fans doesn't plan on missing her team in action.

Sister Jean will be there when the Loyola-Chicago Ramblers take the court on Friday. She became quite a celebrity in 2018 during the school's Final Four run. She says she lobbied the school to allow her to go this year. She had plenty of offers from people willing to help.

"One alum wrote and told me that her husband was willing to drive me town," Sister Jean Dolores-Schmidt said. "Somebody else told me she was going to sneak me on to the university. And another couple said that they thought they would like to kidnap me and Loyola would have to search for me."

She is 101 years old and she has served as the team's chaplain since 1994. She said she’s going to follow all the guidelines and would not interact with the team. She also promised she would not go on to the court.