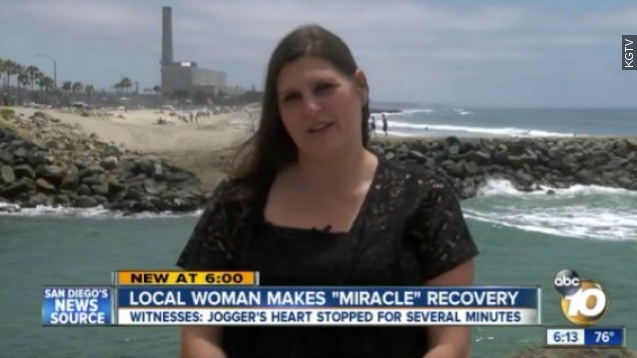 SMS
Single Mother In California Survives Heart Attack And Coma
By Ryan Biek
By Ryan Biek
July 15, 2015
Doctors were amazed when a California woman woke from a coma, brought on by a heart attack that lasted several minutes.
SHOW TRANSCRIPT

"What were the doctor's first words to you?" a reporter for KGTV asked Jessica Hoover.

"You died. You shouldn't have lived," Hoover said.

It's a survival story with multiple miracles. Jessica Hoover collapsed while jogging in California on Dec 1. Doctors say a virus, possibly from a recent case of pneumonia, caused a heart attack for the 37-year-old.

That man was David Raasch.

Even with her heart beating again, Hoover remained in a coma. Doctors feared if she ever woke up, she'd have severe brain damage from the lack of oxygen.

Five days later, to the doctors' astonishment, she started talking.

"And I probably wouldn't have the will to survive if I wasn't the sole provider for my kids," Hoover told KGTV.

But after seven months, her heart is still too weak for her to work.

She said it's "gut-wrenching" not being able to provide for her four children. Until her strength returns, a GoFundMe page is collecting donations for her and her family.

Hoover still has high spirits, though, and is putting things in perspective. She told KGTV: "I'm grateful for every day because I shouldn't have woken up. Every day is a gift."