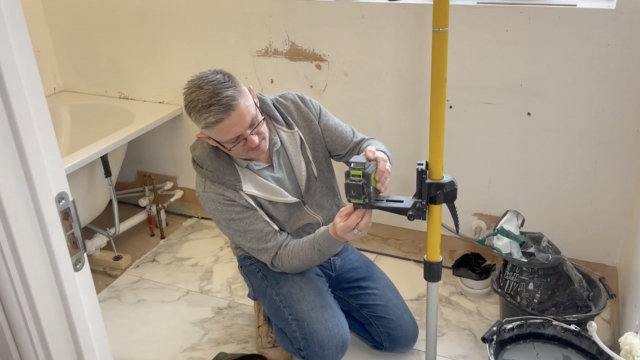 SMS
Singing U.K. Plumber Has Landed Record, Movie Deals
By Luke Hanrahan
By Luke Hanrahan
April 5, 2022
Kev Crane was once just a plumber who sang on the job. Now, he's taking his talents to the public.

Kev Crane was just a plumber in the U.K. who sang on the job. Now he's flush with unexpected attention, landing an unanticipated record deal and a Hollywood film deal.

"It’s just crazy," Crane said. "I can’t describe it, I’ve got no words to describe it because it’s just too bizarre. It’s like an out-of-body experience. That’s the only way I can describe it. I didn’t ever expect it.”

Crane built a home studio during the pandemic and wrote and recorded his 80s tracks and covers.

Now they’re an album, released last September thanks to a man who needed his bathroom fixed.

“He sang to every song on the radio, whether he knew it or not," said Paul Conneally with New Reality Records. "I didn’t think much about it until the neighbors said, 'Who’s that singing in your bathroom?' Because it was summer and the windows were open. And I said 'Well it’s the plumber.' And they said, 'Oh, well he’s got a really good voice.' And I thought, 'Well, I will have a listen.'"

Hollywood got wind of Crane's story. Now, he has signed a movie deal with Los Angeles-based filmmaker Stacy Sherman and screenwriter and producer Billy Ray, both of whom were behind the 2013 blockbuster "Captain Phillips" and the "Hunger Games" movies.

It's an unlikely tale that has now gone viral, making Crane a celebrity in his countryside community.

“[It's] so exciting," said Danielle Luik, Crane’s client. "I’ve got two young boys. The 10 year old is like, 'Oh my goodness, he’s in our house,' so we keep saying we need to get a selfie before he leaves our house."

Crane continues to fit bathrooms by day and record new songs by night.

He says he hopes Jude Law will play him in the movie about his life.