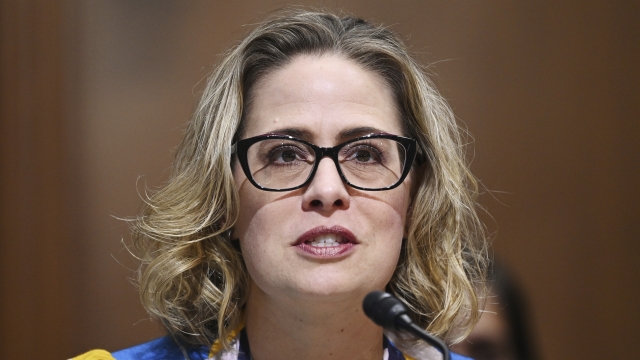 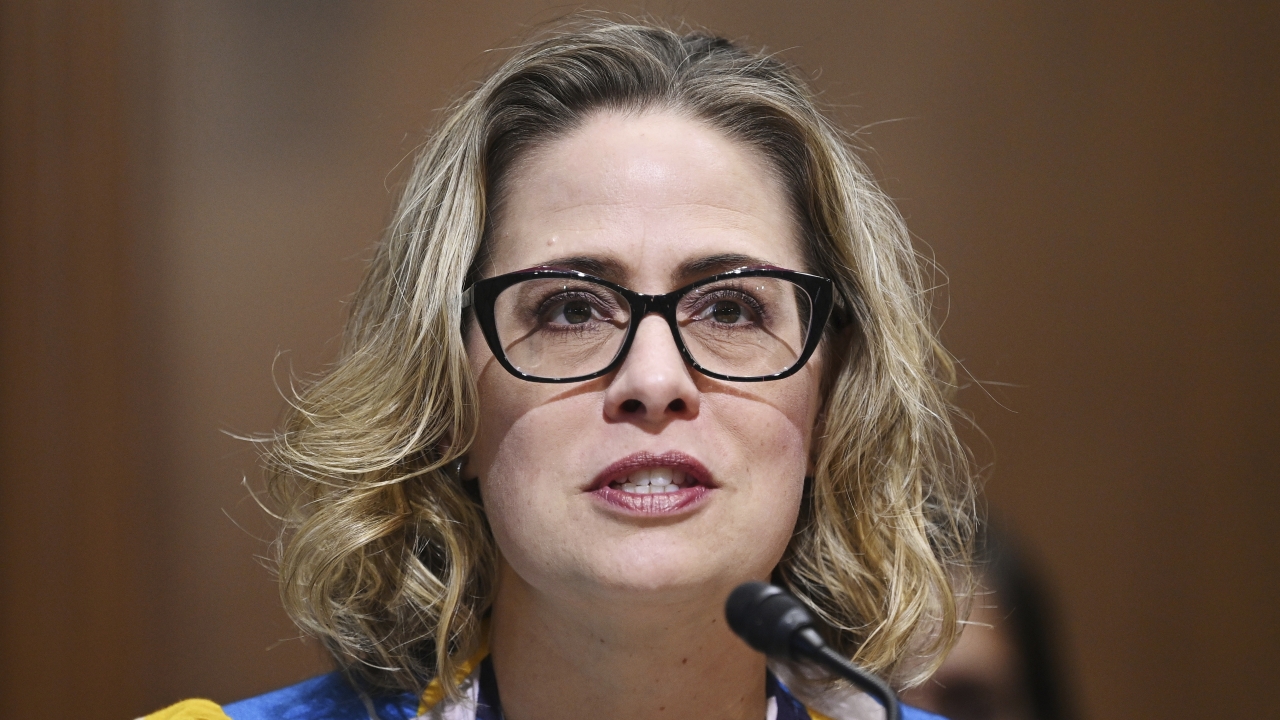 Sen. Kyrsten Sinema, the Arizona Democrat who single-handedly thwarted her party's longtime goal of raising taxes on wealthy investors, received nearly $1 million over the past year from private equity professionals, hedge fund managers and venture capitalists whose taxes would have increased under the plan.

For years, Democrats have promised to raise taxes on such investors, who pay a significantly lower rate on their earnings than ordinary workers. But just as they closed in on that goal last week, Sinema forced a series of changes to her party's $740 billion election-year spending package, eliminating a proposed "carried interest" tax increase on private equity earnings while securing a $35 billion exemption that will spare much of the industry from a separate tax increase other huge corporations now have to pay.

The bill, with Sinema's alterations intact, was given final approval by Congress on Friday and is expected to be signed by President Joe Biden next week.

Sinema has long aligned herself with the interests of private equity, hedge funds and venture capital, helping her net at least $1.5 million in campaign contributions since she was elected to the House a decade ago. But the $983,000 she has collected since last summer more than doubled what the industry donated to her during all of her preceding years in Congress combined, according to an Associated Press review of campaign finance disclosures.

The donations, which make Sinema one of the industry's top beneficiaries in Congress, serve a reminder of the way that high-power lobbying campaigns can have dramatic implications for the way legislation is crafted, particularly in the evenly divided Senate where there are no Democratic votes to spare. They also highlight a degree of political risk for Sinema, whose unapologetic defense of the industry's favorable tax treatment is viewed by many in her party as indefensible.

"From their vantage point, it's a million dollars very well spent," said Dean Baker, a senior economist at the Center for Economic and Policy Research, a liberal-leaning think tank. "It's pretty rare you see this direct of a return on your investment. So, I guess I would congratulate them."

Sinema's office declined to make her available for an interview. Hannah Hurley, a Sinema spokesperson, acknowledged the senator shares some of the industry's views on taxation, but rebuffed any suggestion that the donations influenced her thinking.

"Senator Sinema makes every decision based on one criteria: what's best for Arizona," Hurley said in a statement. "She has been clear and consistent for over a year that she will only support tax reforms and revenue options that support Arizona's economic growth and competitiveness."

The American Investment Council, a trade group that lobbies on behalf of private equity, also defended their push to defeat the tax provisions.

"Our team worked to ensure that members of Congress from both sides of the aisle understand how private equity directly employs workers and supports small businesses throughout their communities," Drew Maloney, the organization's CEO and president, said in a statement.

Sinema's defense of wealthy investors' tax treatment offers a jarring contrast to her background as a Green Party activist and self-styled "Prada socialist" who once likened accepting campaign cash to "bribery" and later called for "big corporations & the rich to pay their fair share" before launching her first campaign for Congress in 2012.

She's been far more magnanimous since, praising private equity in 2016 from the House floor for providing "billions of dollars each year to Main Street businesses." After her election to the Senate, Sinema interned during the 2020 congressional recess at a private equity mogul's boutique winery in northern California.

The soaring contributions from the industry to Sinema trace back to last summer. That's when she first made clear that she wouldn't support a carried interest tax increase, as well as other corporate and business tax hikes included in an earlier iteration of President Biden's agenda.

During a two-week period in September alone, Sinema collected $47,100 in contributions from 16 high-ranking officials from the private equity firm Welsh, Carson, Anderson & Stowe, records show. Employees and executives of KKR, another private equity behemoth, contributed $44,100 to Sinema during a two-month span in late 2021.

In some cases, the families of private equity managers joined in. David Belluck, a partner at the firm Riverside Partners, gave a $5,800 max-out contribution to Sinema one day in late June. So did three of his college-age kids, with the family collectively donating $23,200, records show.

"I generally support centrist Democrats and her seat is important to keep a Democratic Senate majority," Belluck said, adding that his family has known Sinema since her election to Congress. "She and I have never discussed private equity taxation."

The donations from the industry coincide with a $26 million lobbying effort spearheaded by the investment firm Blackstone that culminated on the Senate floor last weekend.

By the time the bill was up for debate during a marathon series of votes, Sinema had already forced Democrats to abandon their carried interest tax increase.

"Senator Sinema said she would not vote for the bill .. unless we took it out," Senate Majority Leader Chuck Schumer told reporters last week. "We had no choice."

But after private equity lobbyists discovered a provision in the bill that would have subjected many of them to a separate 15% corporate minimum tax, they urgently pressed Sinema and other centrist Democrats for changes, according to emails as well as four people with direct knowledge of the matter who requested anonymity to discuss internal deliberations.

"Given the breaking nature of this development we need as many offices as possible weighing in with concerns to Leader Schumer's office," Blackstone lobbyist Ryan McConaghy wrote in a Saturday afternoon email obtained by the AP, which included proposed language for modifying the bill. "Would you and your boss be willing to raise the alarm on this and express concerns with Schumer and team?"

McConaghy did not respond to a request for comment.

Sinema worked with Republicans on an amendment that stripped the corporate minimum tax on private equity from the bill, which a handful of vulnerable Democrats also voted for.

"Since she has been in Congress, Kyrsten has consistently supported pro-growth policies that encourage job creation across Arizona. Her tax policy positions and focus on growing Arizona's economy and competitiveness are longstanding and well known," Hurley, the Sinema spokesperson, said.

But many in her party disagree. They say the favorable tax treatment does little to boost the overall economy and argue there's little compelling evidence to suggest its benefits are enjoyed beyond some of the wealthiest investors.

Some of Sinema's donors make their case.

Blackstone, a significant source of campaign contributions, owns large tracts of real estate in Sinema's home state, Arizona. The firm was condemned by United Nations experts in 2019 who said Blackstone's financial model was responsible for a "financialization of housing" that has driven up rents and home costs, "pushing low-income, and increasingly middle-income people from their homes."

Blackstone employees, executives and their family members have given Sinema $44,000 since 2018, records show.

In a statement, Blackstone called the allegations by the U.N. experts "false and misleading" and said all employee contributions are "strictly personal." The firm added that it was "incredibly proud of its investments in housing." 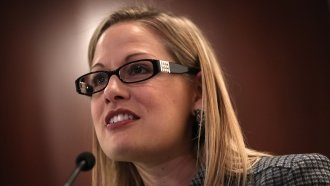 Did Kyrsten Sinema Really Protest Troops In A Pink Tutu?

Another significant financial services donor is Centerbridge Partners, a New York-based firm that buys up the debt of distressed governments and companies and often uses hardball tactics to extract value. Since 2017, Sinema has collected at least $29,000 from donors associated with the firm, including co-founder Mark Gallogly and his wife, Elizabeth Strickler, records show.

In 2012, Centerbridge Partners purchased Arizona-based restaurant chain P.F. Chang's for roughly $1 billion. After loading the struggling company up with $675 million of debt, they sold it to another private equity group in 2019, according to Bloomberg News. The company received a $10 million coronavirus aid loan to cover payroll, which the federal government later forgave, but shed jobs and closed locations as it struggled with the pandemic.

Centerbridge Partners was also part of a consortium of hedge funds that helped usher in an era of austerity in Puerto Rico after buying up billions of dollars of the island government's $72 billion debt — and filing legal proceedings to collect. A subsidiary of Centerbridge Partners was among a group of creditors who repeatedly sued one of the U.S. territory's pension funds. In one 2016 lawsuit, the group of creditors asked a judge to divert money from a Puerto Rican pension fund in order to collect.

Liberal activists in Arizona say they plan to make Sinema's reliance on donations from wealthy investors a campaign issue when she is up for reelection in 2024.

"There are many takes on how to win, but there is no universe in which it is politically smart to fight for favorable tax treatment of the wealthiest people in the country," said Emily Kirkland, a political consultant who works for progressive candidates. "It's absolutely going to be a potent issue."