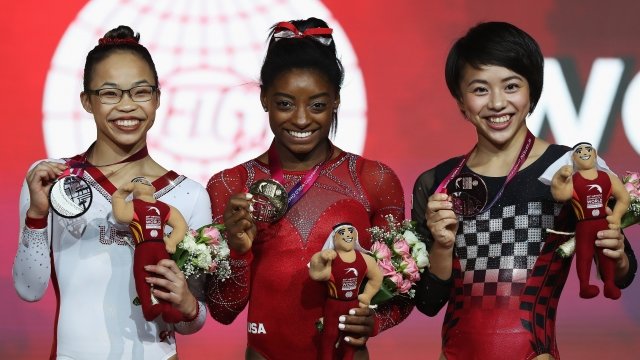 Simone Biles is now the most decorated woman in Gymnastics World Championships history after closing out the 2018 competition with four gold medals.

Along with the silver and bronze medals she won at the championships in Doha, Biles brought her career medal total in those competitions up to 20. And she did it all while carrying a kidney stone.

That medal total ties her with retired Russian gymnast Svetlana Khorkina, but Biles holds the tie-breaker with more golds. She's at a record total of 14 gold medals at world championships in her career.

Biles took gold in the floor exercise, vault, individual all around, and team competitions. She also broke the record for most world championship titles with her gold in the vault on Friday.

Biles had taken a 14-month rest after the 2016 Summer Olympics in Rio, saying she needed a break from training.