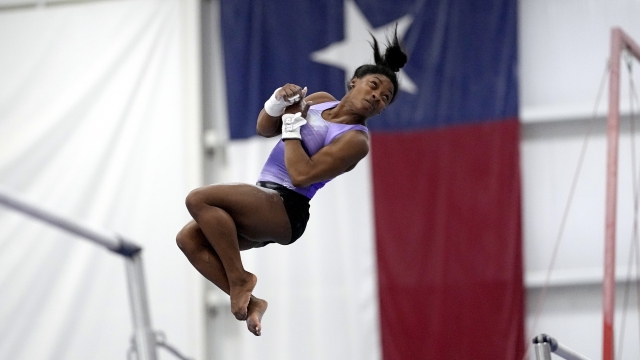 Simone Biles hops up in a chair and lets out a small sigh."Only 12 more weeks," the greatest gymnast of her generation and any other says with a hint of wistfulness.

Not 12 weeks until the 2021 Olympics begin. But until they're over.

Don't misunderstand. This summer, the 24-year-old has every intent on becoming the first woman to repeat as Olympic champion in more than a half-century. To drag, push and pull her sport into the future. To use her ever-expanding platform to advocate for real, substantive change within USA Gymnastics as it tries to emerge from the rubble of the Larry Nassar sexual abuse scandal.

Still, Biles is tired. The five years since her glorious star turn in Rio de Janeiro — when she won four gold medals and five in all — have taken a toll. On her mind. On her spirit. And definitely on her big toes, which remain in her words "shattered."

She needs a break. Probably an extended one. Maybe a permanent one.

Cecile Landi, who along with husband Laurent has served as Biles' coach since the fall of 2017, says Biles is "ready for her next phase."

One that will begin in early August when her plane back from Japan mercifully back in the states.

For now, however, history beckons.

Biles will walk onto the competition floor for the first time in more than 18 months on Saturday night at the U.S. Classic in Indianapolis. The meet marks the start of a frantic stretch in which Biles will stand at the center of a white-hot spotlight of her own creation not only as the face of gymnastics but the entire U.S. Olympic movement and perhaps the Tokyo Games themselves.

Yes, that's her megawatt smile featured at the end of nearly every NBC Olympic promo. The image and the ubiquity of it initially caught her off guard. Scared her even. Not anymore.