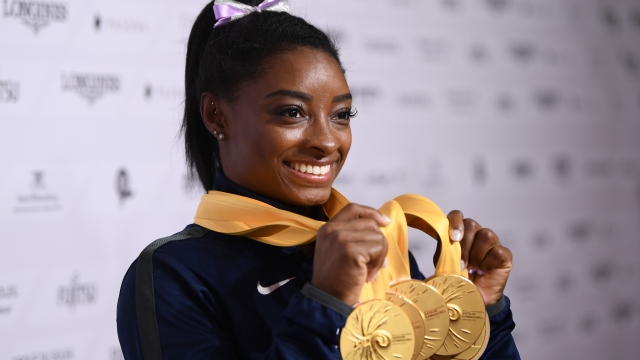 Simone Biles is the most decorated gymnast ever after winning her 24th and 25th medals at the World Gymnastics Championships on Sunday. She took gold for the world's most technically demanding routines on the balance beam and floor in Stuttgart, Germany.

The 22-year-old tied Vitaly Scherbo's record of 23 medals on Saturday with her winning vault performance. Scherbo competed for the Soviet Union, Unified Team and Belarus, and set the record in 1996.

Then, on Sunday, Biles scored 15.066 points and won gold on the balance beam — her 24th medal. Later that day, Biles did a triple-twisting, double somersault on the floor, scoring 15.133 points and winning her 25th medal, setting a new world record.

She set yet another world record at the competition last week, winning her fifth world all-around title.

The gymnast now has four moves named after her. She performed the two newest ones on Oct. 5 at the same world championships. Her triple-double — a double backflip with three twists — will now be known as the "Biles II." And her double-double dismount from the balance beam, which is a double-twisting double backflip, is now called the "Biles."

Biles told The New York Times, "This is really the best worlds performance I have ever put out."

Of her 25 total medals, 19 are gold, and she won five of those just over this last week. Her world record is even more impressive when you consider that women can only compete in six events at the world championships, while men can compete in up to eight.

When asked what kind of legacy she wants to leave, Biles told USA Today that she believes it's important to empower girls and teach them "that it's OK to say, 'Yes, I am good at this.'" She said: "I've won five world titles, and if I say, 'I'm the best gymnast there is,' [the reaction is], 'Oh, she's cocky, look at her now.' No, the facts are literally on the paper. I think it's important to teach the youth that."