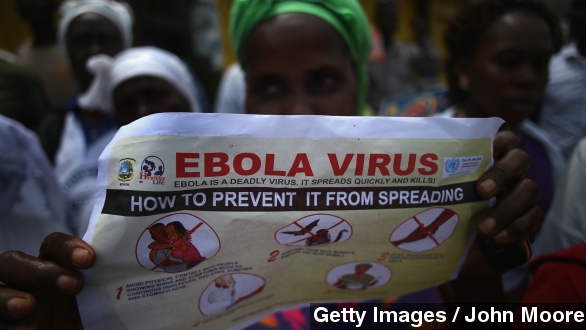 Sierra Leone's Vice President Samuel Sam-Sumana has placed himself under voluntary quarantine after one of his bodyguards died from Ebola.

Sam-Sumana has reportedly shown no symptoms but placed himself in a 21-day quarantine as a precaution saying, "I do not want to take chances and I want to lead by example. I am very well and showing no signs of illness." (Video via Israeli Diamond Industry Portal)

The Ebola outbreak in West Africa has killed nearly 10,000 people but had slowed down in recent weeks.

However, Sierra Leone, one of the countries hit the hardest by the disease, has seen a surge in new infections in recent weeks.

Officials say an uptick in cases after an outbreak like this one has slowed is not uncommon. Authorities are still confident the spread of the disease can be stopped. (Video via ABC Australia)

The New York Times reports fisherman brought the disease to the shore in early February and volunteers were unable to contain the outbreak. A local Ebola response coordinator told the outlet, "We worked so hard. It is a shame to all of us."

Sam-Sumana is the first senior government official to be placed in quarantine. His entire staff is also under observation.