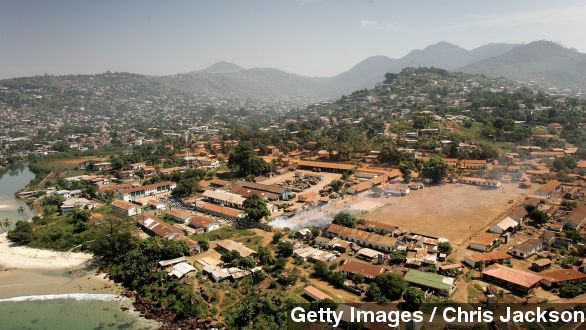 By Evan Thomas
September 20, 2014
Sierra Leone is locked down as aid workers and volunteers look for new cases of Ebola.
SHOW TRANSCRIPT

The government of Sierra Leone has started a three-day curfew to combat the spread of Ebola — emptying the streets in the capital city of Freetown.

Aid workers and volunteers are conducting a door-to-door campaign across the nation of some six million people, warning residents of the dangers of Ebola and searching for new cases. (Video via Al Jazeera)

“They have decided that three days’ lockdown would be effective, because the incubation period of the virus is between two to three days.” (Video via CNN)

“The lockdown itself has started in earnest and people are generally complying. The streets of Freetown are completely deserted, and there are only police vehicles and vehicles transporting those volunteers as you can see on the streets.” (Video via BBC)

But according to the BBC, critics of the plan say the quarantine measures could erode public trust in doctors and health workers fighting the disease. As The New York Times highlights, enthusiasm for the campaign is high — for better or for worse.

“At one house, several volunteers talked loudly at once about hand washing, leaving the residents visibly dazed. At … another, one gave out questionable information about the Ebola virus — seeming to contradict some basic precautions.”

Sierra Leone’s campaign also comes amid active resistance to aid initiatives to in the region: in Guinea, eight aid workers were killed when they visited a remote village to raise awareness about the disease. NBC reports authorities have since made six arrests in the case.

Even if the curfew works and doctors can collect patients for treatment, space is at a premium.

A medic told The Guardian aid centers could end up quartering known Ebola cases right next to suspected ones.

"It is a worry. There is a quite rigorous testing process before you can confirm the cases, and many of the early symptoms are the same as ordinary illnesses like malaria or food poisoning.”

According to CDC statistics last updated on Thursday, there are more than 1,600 cases of Ebola in Sierra Leone, and 562 deaths attributed to the disease.

This video includes an image from Getty Images / John Moore.