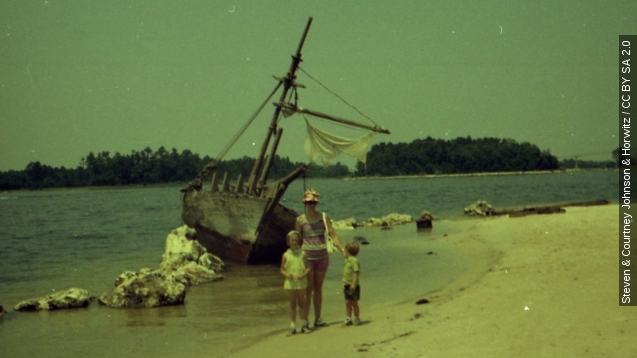 We're gonna start this like most good stories: Once upon a time, there was an island, near Orlando, Florida, owned by Walt Disney. Want to go explore?

"Have you lost your senses completely?" said a character in "The Little Mermaid."

"The human world, it's a mess," said another character. (Video via Buena Vista Pictures / "The Little Mermaid")

But now, our story turns more mysterious than a dinglehopper was to Ariel. Disney's Treasure Island — which was later renamed Discovery Island — closed in 1999, and no one seems to know why.

Mental Floss theorizes it closed because the super-popular attraction Animal Kingdom opened in 1998 in the same park. It's kind of the same thing, but the article says it's a "bigger-and-better zoological park."

Although, according to an archived 1989 Orlando Sentinel article, the older 11-acre attraction wasn't without controversy:

"A two-month investigation resulted in 16 state and federal charges filed ... most dealing with the death of vultures which were crammed into a tiny, overheated shed for days with limited food and water."

The Walt Disney Company pleaded not guilty to charges and settled out of court. The attraction was reportedly not that popular, either, which would give credence to Animal Kingdom's popularity ultimately closing it down.

So, fans have been missing out on the island for more than 15 years now. And Disney has neglected its old attraction.

Although rumors spread that the island would be repurposed with a theme from the "Lost" TV show.

And another said it would be turned into Myst Island, based off the "Myst" PC game.

That last one sounds cool, but neither rumor became reality, and the island just sat there. Years after it closed, a blogger explored the abandoned island.

And even though this blog post was written six years ago, it has recently reappeared in headlines.

The blogger actually swam onto the island to avoid getting caught. He found the lights were still on and the old attraction had not been maintained.

That's creepier than the scene where Snow White is lost in the woods. (Video via RKO Radio Pictures  / "Snow White and the Seven Dwarfs")

The blogger wrote: "We were literally surrounded by what sounded like thousands of birds. ... The going was pretty slow on the island due to the limited lighting, heavily overgrown paths, and disorienting animal noises."

Here's an idea: Maybe Disney should turn the abandoned island into an "Into the Woods" attraction.