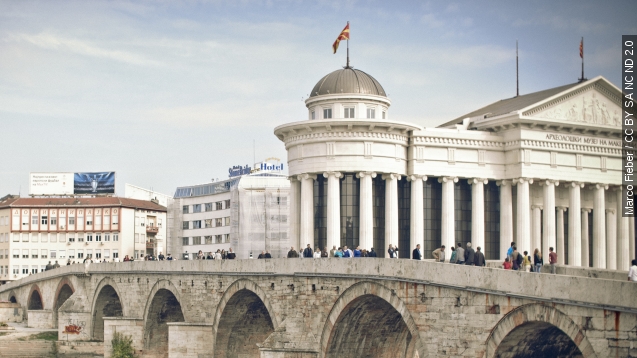 The small Balkan country of Macedonia could be headed for a showdown as dueling mass protests look set to collide on Monday. (Video via Macedonian Radio Television)

Sunday saw tens of thousands of protestors fill the streets of Skopje, the country's capital, calling for the resignation of Prime Minister Nikola Gruevski. Many protestors said they planned to camp out until their demands are met. (Video via Al Jazeera)

In response, Gruevski called for his supporters to join a counter-protest on Monday, opening up the possibility the two groups could come face to face. (Video via Alsat-M)

Protests against the prime minister have already turned violent on several occasions as demonstrators clashed with police, so it's clear to see why the situation is so tense. But even if protests stay peaceful this week, the country's political factions still seem to be on a collision course.

Opposition leader Zoran Zaev has stirred public anger against Gruevski by accusing the prime minister of carrying out a massive illegal wiretapping campaign against journalists and judges — and slowly releasing what he says are the recordings.

Gruevski has called those recordings forgeries and struck back against Zaev, accusing him of trying to destabilize the country. Gruevski's party is also thought to have leaked a video online last week that allegedly shows Zaev demanding a 200,000-euro bribe over a construction project in 2013. (Video via Alsat-M)

A spokesman for the prime minister's party said the tape proves Zaev is guilty of corruption, telling the media, "We have never seen a bigger scandal in the last 25 years of democracy." Zaev says the conversation was innocent and that the tape was edited to make him look bad.

All of the political turmoil between the ruling party and the opposition is bad enough, but Western analysts and media seem convinced it could get much worse. Again and again, they portray the prime minister as a kind of minor dictator who will do anything to stay in power.

The Financial Times called Gruevski a "strongman," and The New York Times said under his tenure, "Macedonia has slowly ... slipped into authoritarian rule under a party that has curtailed press rights, emboldened security forces, dominated the judiciary and once even ejected the opposition from Parliament."

And an incident earlier this month in which the country's government claimed to have busted a terror cell and arrested 30 Albanian militants is being treated with skepticism. In carefully-worded statements, the head of NATO called for a transparent investigation and an EU official warned Macedonian leaders not to let the incident incite ethnic violence. (Video via Al Jazeera)

That's a polite way of hinting at what the protestors have put more bluntly: that Gruevski in some way orchestrated — or at least planned to use — the terror raid as a way to turn Macedonians against Albanians and take some of the pressure off himself.

That's the sentiment in a viral video from the city where the raid took place in which Albanian and Macedonian men exchange a hug and accuse Gruevski of trying to turn them against one another. And to hear a Deutsche Welle journalist tell it, the prime minister could be capable of much more. (Video via 24 Vesti)

"Many in his government, including him, are afraid if they lose power they will end up in jail. So they have their backs against the wall and they don't have many options left," Boris Georgievski said.

The EU, UN and NATO have all called for the country's political crisis to be resolved peacefully and democratically.