Should Trump Worry About Cruz And Kasich Working Together? 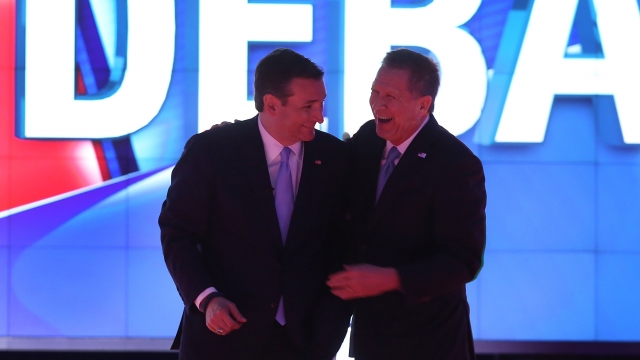 SMS
Should Trump Worry About Cruz And Kasich Working Together?
By Ryan Biek
By Ryan Biek
April 25, 2016
Trump has called his Republican presidential opponents "weak and desperate."
SHOW TRANSCRIPT

Republican presidential hopefuls John Kasich and Ted Cruz are working together against Donald Trump –– a move Trump is calling "weak and desperate."

But is he right? Cruz and Kasich announced Sunday they'd divide campaign resources for three states' upcoming primaries. A statement released by Cruz's camp calls a Trump nomination "a sure disaster for Republicans."

It's completely possible Trump would win a majority of delegates. Even that doesn't guarantee him the nomination, which is kind of a long story. But it'd be a lot easier for Trump opponents to just prevent him from getting that majority in the first place.

And one state in particular has been called a must-win for Trump if he wants to avoid a contested convention: Indiana.

You can see why Cruz and Kasich working together in that state is a smart move.

Still, their partnership is a limited one. Just a day after both campaign announcements, Kasich said he isn't telling supporters not to vote for him in Indiana.

Cruz and Kasich are still planning to openly compete against each other for hundreds of delegates. And even though they're partnering over Indiana, Oregon and New Mexico, their competition in California alone is worth nearly twice as many delegates.

Kasich sits at a distant third in terms of delegates now, but Cruz and Trump can't be taking him lightly. In a recent poll about a hypothetical contested convention, Kasich had the most political insiders backing him.

"I think what Donald Trump needs to understand is that he cannot beat Hillary Clinton," he told reporters Monday.

Cruz, on the other hand, trails Clinton by a narrow margin in similar polls.