Should The White House Correspondents Dinner Write Its Obituary? 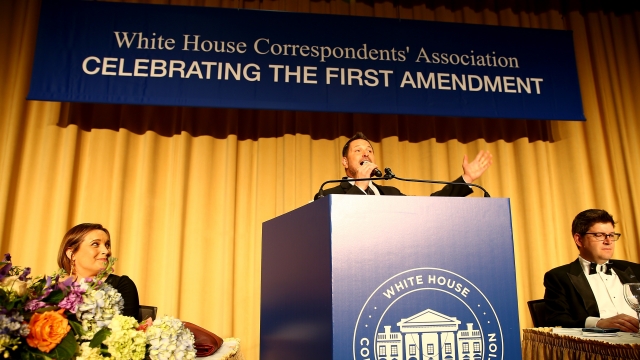 Over the years, the White House Correspondents Dinner has gone from this ... to this.

Ronald Reagan: "A president may like members of the press personally - and I do."

So that's the question for a long-heralded Washington D.C. tradition. When it comes to White House Correspondents Dinner, is it finally time to get it over with - and let it die?

The dinner, set for this Saturday, has been a fixture since 1921. It has hosted presidents in a schmoozing of press and power since Calvin Coolidge appeared in 1924. It funds journalism scholarships for students, and once appeared as a sentimental event.

"So what I hope my epitaph will be with the White House Correspondents, what every president's epitaph with the press should be this: he gave as good as he got," Reagan said.

Over time, the dinner morphed into an Oscars night for politics geeks. The gathering of reporters, politicians, celebrities, lobbyists and PR flacks became known as the Nerd Prom.

But critics say the event has evolved in so many ways over the years, it now serves as an unflattering portrayal of a Beltway media elite out of touch with average Americans. They say the dinner, meant to celebrate a free press, is something for the press to avoid.

“It never has been a particularly good idea for journalists to don their fanciest clothes and cozy up to the people they cover, alongside Hollywood celebrities who have ventured to wonky Washington to join the fun," she wrote. "But in the current era, it’s become close to suicidal for the press’s credibility."

One person who refuses to attend is President Donald Trump. He will skip the event for the third year for a rally in Wisconsin. And this year, he has barred administration officials from attending. Trump criticized the dinner as "boring" and "too negative." Though eight years ago, he was a banquet guest in one of its most famous moments - as a foil for predecessor Barack Obama.

"Donald Trump is here tonight. Now I know that he’s taken some flak lately. But no one is happier, no one is prouder to put this birth certificate matter to rest than the Donald," Obama said. "And that's because he can finally get back to the issues that matter – like did we fake the moon landing, what really happened in Roswell, and where are Biggie and Tupac?"

It was comedian Michelle Wolf's roasting of Press Secretary Sarah Sanders last year that energized calls for revamping the event, if not killing it.

"I actually really like Sarah. I think she is very resourceful. Like she burns facts and she uses that ash to create a perfect smoky eye. Like maybe she’s born with it. Maybe it's lies – probably lies," Wolf said.

Afterward, White House reporter Peter Baker of the New York Times, which doesn't permit its journalists to attend, tweeted: “Unfortunately, I don’t think we advanced the cause of journalism tonight."

Stand-up comedians have headlined the dinner since 1983. After the Wolf uproar, the Correspondents Association chose Pulitzer Prize-winning author Ron Chernow as this year's speaker.

Chernow said he was asked to make a "case for the First Amendment and I am happy to oblige."

But will the White House Correspondents Dinner also make a case - for why it should survive?