Should The US Grant Temporary Protections To Venezuelan Immigrants? 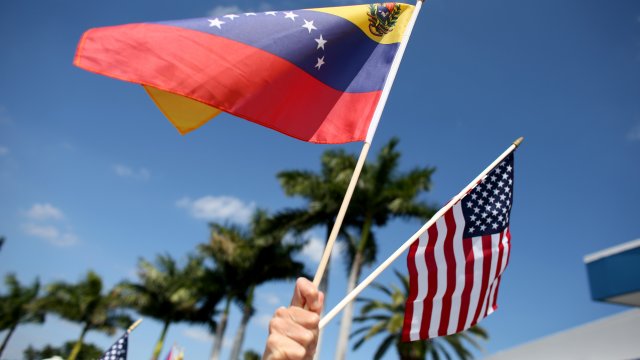 SMS
Should The US Grant Temporary Protections To Venezuelan Immigrants?
By Ben Schamisso
By Ben Schamisso
February 22, 2019
Tens of thousands of Venezuelans have recently migrated to the U.S. Some bipartisan lawmakers want them to be temporarily shielded from deportation.
SHOW TRANSCRIPT

The humanitarian and political crisis in Venezuela is intensifying. And every day, thousands of people are fleeing the country.

Most of them — more than 1 million — have escaped to neighboring Colombia. But tens of thousands have also made it to the U.S.

Nearly 50,000 Venezuelans applied for asylum in the last two years, making it by far the country with the most applicants.

But because the asylum process is lengthy and increasingly restrictive, some lawmakers on both sides of the aisle now want these new immigrants to be shielded from deportation through a program known as TPS, or Temporary Protected Status.

Beyond Congress, the TPS idea has also gained traction at the State Department, according to internal documents reviewed by the Daily Beast.

So how does TPS work? And what are some arguments for and against granting it to Venezuelan immigrants?

TPS was enacted in 1990 to give certain immigrants already in the U.S. time-limited permissions to work and live here because of "extraordinary and temporary conditions" in their home countries.

Because the program is meant to be temporary, the White House revisits the protections for each country every six or 18 months. So far, the Trump administration has ended TPS for more than 250,000 immigrants from El Salvador, Honduras, Nicaragua, Sudan, Haiti and Nepal.

The government argues that the conditions in all these countries have improved enough for their citizens to safely return home. But a federal judge temporarily blocked the TPS termination for four of these six countries.

So, what about Venezuela?

Well, by all accounts, the situation in the country is extremely dire. The economy has shrunk by 50 percent over the past four years, there are widespread food shortages and homicide rates are through the roof. Immigration lawyer Amy Maldonado told Newsy that these factors are "a clear set of 'extraordinary and temporary conditions' that justify ... one or two TPS grants."

Dave Ray, a spokesperson for an organization that lobbies for immigration restrictions, argues that if the White House decides to designate Venezuela for TPS, it should only include Venezuelans who are legally in the U.S.

Otherwise, Ray said, "a TPS designation will serve as a huge magnet, drawing waves of future illegal immigration from Venezuela, and creating yet another new pool of immigrants pressing the U.S. government for permanent residence."

Ray also stressed that, if approved, the TPS program should be truly temporary and its beneficiaries should return home at the end of the grant. Most current TPS grantees have been able to renew their protections for decades, which, in Ray's opinion, undermines the credibility of the program.

While the fact that the State Department is reportedly considering TPS for Venezuela is consequential, it's the Department of Homeland Security that has the final say on the matter. And under the Trump administration, DHS has not yet designated any new country for TPS.