Should The CIA Hand Over Its Drone Program To The Pentagon? 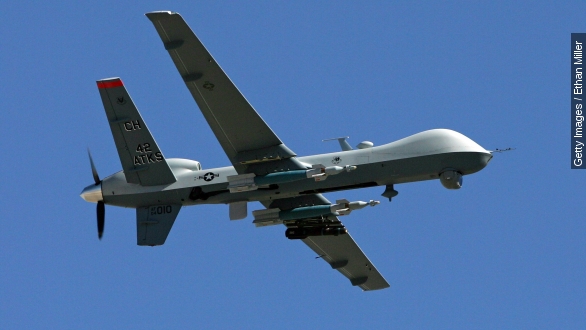 SMS
Should The CIA Hand Over Its Drone Program To The Pentagon?
By Matt Picht
By Matt Picht
April 27, 2015
The recent death of two Western hostages has renewed calls for the drone program to be put under the Pentagon's exclusive jurisdiction.
SHOW TRANSCRIPT

Currently, America's counterterrorism drone strikes are carried out by two agencies: the Pentagon, which discloses its strikes to the public, and the CIA, which conducts strikes shrouded in so much secrecy the government won't formally acknowledge their existence.

Which is why when President Obama had to apologize last week for a drone strike which accidentally killed two Western hostages, he never used the words "drone," "strike" or "CIA." The incident has prompted some suggestions that intelligence agencies shouldn't carry out paramilitary programs.

Ohio Governor John Kasich told CNN, "I don't believe the drone program should be run out of the CIA."

And Arizona Senator John McCain said, "I think it should be conducted in oversight, and administered by the Department of Defense."

There's been a lot of political support for folding the CIA's drone program into the Pentagon — including from the White House, which unsuccessfully tried to take the CIA's drones away in 2013. So, what would change if the Pentagon got full control over drone strikes?

Advocates for a military-run drone program note the CIA lacks the accountability checks the Pentagon has to go through, which could lead to abuses. Solid numbers are hard to come by, but the Bureau of Investigative Journalism estimates the CIA drone strikes in Pakistan have killed between 423 and 962 civilians since 2004. (Video YouTube / Aiirsource Military Videos)

Consolidating the program would also make it easier to administer and review. Currently, each agency follows different rules for conducting strikes, and congressional oversight of the entire program is split between the intelligence and armed services committees. (Video via C-SPAN)

But it's no guarantee things will get better if the CIA does hand over its drone program to the military. After all, the Pentagon has just as much authority as the CIA to carry out covert drone operations, and it may need to if it assumes control of the CIA's program.

Most countries that cooperate with the CIA on drone strikes — think Pakistan and, formerly, Yemen — do so on the condition of deniability. Acknowledging the strikes could implicate foreign governments in them, which would jeopardize the entire program.

The White House's 2013 push to consolidate the drone program in the Pentagon ended when lawmakers blocked the transfer in an amendment to the 2014 spending bill. It's uncertain whether this latest push will get any further.