Should Obama, U.S. Push Other Countries On Carbon Emissions? 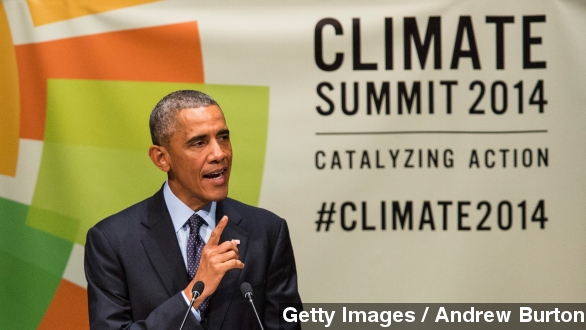 SMS
Should Obama, U.S. Push Other Countries On Carbon Emissions?

By Sebastian Martinez
September 24, 2014
President Obama urges China to take the lead with the U.S. on climate change, but does the U.S. have the lead to begin with?
SHOW TRANSCRIPT

In the wake of U.S. airstrikes in Syria and the president's statements about them, it would've been easy to overlook another speech he gave Tuesday — on climate change. (Video via U.S. Department of Defense)

President Obama spoke at the United Nations Climate Summit where he talked about the urgency of the issue and specifically pressed China — the largest current emitter of greenhouse gases — to commit to change. (Video via The White House)

PRESIDENT OBAMA VIA THE WHITE HOUSE: "As the two largest economies and emitters in the world, we have a special responsibility to lead. ... That's what big nations have to do."

But, as The New York Times writes, he might've been preaching to the choir, as China is already "struggling with air pollution so extreme that it has threatened economic growth, regularly kept millions of children indoors and ignited street protests."

And China has already taken steps to go greener, investing in renewable energy like solar power on a large scale across the country. (Video via The Financial Times)

In fact, Forbes reports the country was the biggest investor in renewable energy in 2013, with a whopping total of $56.3 billion spent as part of its 12th Five-Year Plan for Economic and Social Development.

So, with that in mind, it's worth asking — does the president really have a leg to stand on when it comes to pushing other countries to act on climate change?

He was careful to list off the U.S.' credentials.

PRESIDENT OBAMA: "We now harness three times as much electricity from the wind and 10 times as much from the sun as we did when I came into office. ... Over the past eight years, the United States has reduced our total carbon pollution by more than any other nation on Earth."

He made that last claim, verbatim, during his State of the Union Address in January, but it's a little misleading, seeing as until recently the U.S. had the most emissions to reduce. (Video via The White House)

As PolitiFact points out, a more useful way of looking at it is by proportion. The U.S. has reduced emissions by 6 percent. Compared to the United Kingdom, which saw a 13-point reduction, and Greece's 15 percent reduction, it's not quite as impressive.

Couple that with the president's support of hydraulic fracturing, or "fracking," for natural gas, which critics say is worse than coal mining for all the methane it releases. Suddenly, the administration's credentials don't look quite so strong. (Video via The Telegraph)

The president's comments at the summit echo those of then-President Clinton at the U.N.'s last major climate summit in Kyoto in 1997. Facing a Republican-controlled Congress, though, Clinton wasn't able to get the agreement ratified. A new agreement is expected for 2015.