Shooting Outside D.C.-Area High School Kills 1 And Injures Another 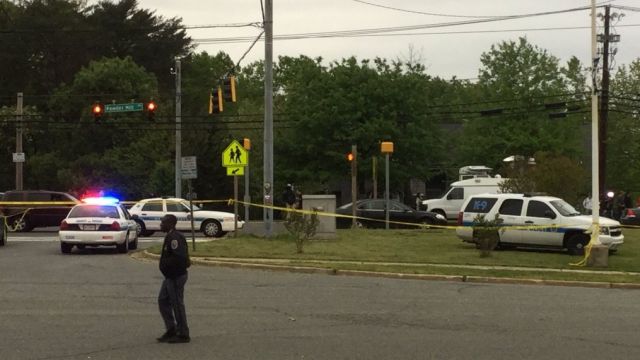 SMS
Shooting Outside D.C.-Area High School Kills 1 And Injures Another
By Katie Link
By Katie Link
May 5, 2016
Classes had already been dismissed for the day when the shooting happened.
SHOW TRANSCRIPT

A woman was killed and a man was injured after a shooter opened fire at a Washington, D.C., area high school Thursday afternoon.

Officials say a woman was in the High Point High School parking lot when she was approached by a man who knew her. The two reportedly had a verbal altercation.

A nearby man tried to intervene — that's when the gunman opened fire, shooting the bystander repeatedly. He's expected to recover from his injuries.

The gunman then opened fire on the woman. She died after being shot multiple times.

Prince George's County Police Chief Hank Stawinski said: "This was a sad, sad event, which at this point appears to be domestic violence which occurred in the parking lot. No students were directly involved; no students were harmed during this event."

Classes had already been dismissed for the day when the shooting happened. According to WUSA, students who were still in the area for after-school activities were secured inside the building.

As of Thursday night, officials were still searching for the gunman.

This video includes clips from WJLA and WTTG.