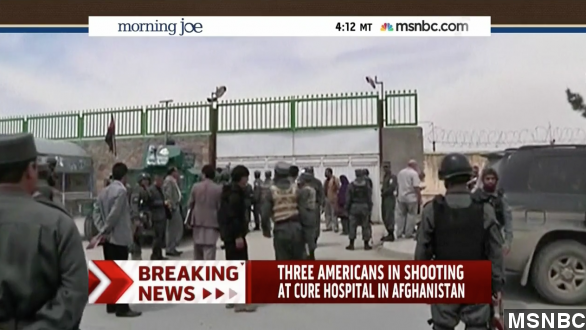 Three American doctors working at a nonprofit children's hospital in Afghanistan are dead after local police say a security guard opened fire on them.

STEVE DOOCY, FOX NEWS: "Two others were hurt. Officials on the ground say the guard was shot and wounded during the attack, and he is undergoing surgery at the same hospital right now."

It wasn't immediately clear how the gunman was injured. While some media outlets simply say the man was shot during the attack, others like MSNBC report the man turned his gun on himself.

Around 4:45 a.m. EST, the U.S. Embassy in Kabul tweeted, "With great sadness we confirm that three Americans were killed in the attack on CURE Hospital. No other information will be released at this time." (Via Twitter / @USEmbassyKabul)

ABC is reporting a father and son were among the three people killed while one of the injured is an American nurse.

Based on quotes coming from the scene, it does not look like Afghan officials are differentiating between doctors and nurses as a Health Ministry spokesman called all five people shot "doctors."

CURE International is a Christian-based nonprofit operating hospitals in several Third World countries with the purpose of "healing the sick and proclaiming the kingdom of God."

Earlier this month, an Afghan police officer opened fire on two journalists trying to profile the country's elections for the Associated Press. Photojournalist Anja Niedringhaus was killed. (Via BBC)

The man accused in that attack claimed a recent drone strike by U.S. forces had killed at least one of his family members. CNN spoke with a Kabul-based reporter from The Times of London on what might have motivated the shooter at CURE's hospital.

JEREMY KELLY, THE TIMES OF LONDON: "Either, as you mentioned, an insurgent planted into the security forces or someone who has had either mental or emotional issues that forced them to act this way." (Via CNN)

Networks are working to identify the victims.