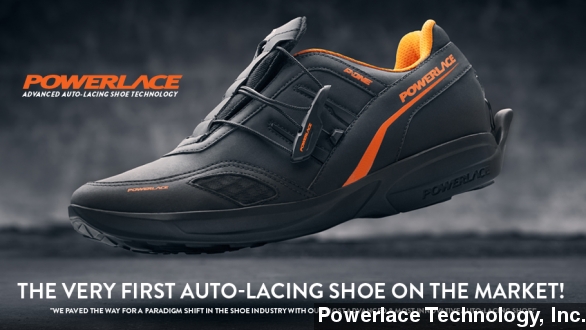 SMS
Shoemakers Put Back-To-The-Future-Style Kicks On Kickstarter
By Cliff Judy
By Cliff Judy
November 18, 2014
Canadian shoemakers say they've come up with a "Back to the Future"-style self-lacing shoe, and designers believe its success lies in its simplicity.
SHOW TRANSCRIPT

Oh, Michael J. Fox and your kicks. Look what you started with your promise of flying cars and self-tying shoes by 2015. That's almost here, you know.

Have no fear, Back to the Future fans. A group of Canadian shoemakers say they've pulled off the shoes part. They now need some startup cash, but they've still pulled it off.

Powerlace Technology hopes its self-lacing shoe will raise $650,000 on Kickstarter over the next two months. Designers believe the shoe's potential success lies in its simplicity. Stepping on the heel tightens the laces.

The concept, as we said, gained almost cult status after the 1989 "Back to the Future" sequel showed Fox running around the 21st century wearing Nike high-tops with laces that made even velcro look like a chore. (Video via Universal Pictures / "Back to the Future Part II")

And yes, this has been tried before, albeit with prototypes that typically involved you strapping something to your foot with a motor inside or sensors connected to your heel to make the laces tighten. (Video via YouTube / rebecca .u & YouTube / Blake Bevin)

Powerlace Technology says it's been working on a self-lacing shoe since 2007, and the timing of the company's Kickstarter campaign probably isn't that much of a coincidence.

Besides the 2015 date the movie established as essentially an arbitrary deadline in all of our minds, Nike announced in February it also planned to release a self-lacing shoe sometime next year.

The company also released 1,500 Nike Air Mags in 2011 styled after the movie's shoe, but those didn't lace themselves and were purely for auction to benefit the Michael J. Fox Foundation for Parkinson's Research. (Video via Nike)

Powerlace's Kickstarter campaign ends on January 14th. The company says reaching its goal will help it mass produce the shoes.