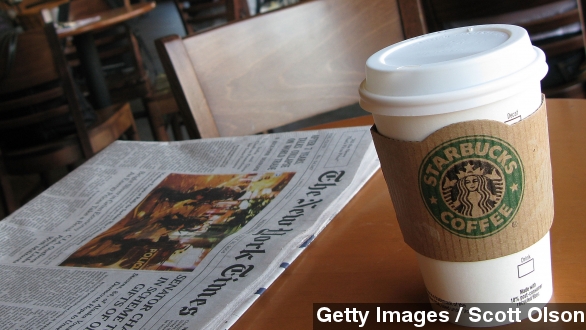 SMS
Shocker: Journalists Are Utterly Addicted To Coffee
By Jake Godin
By Jake Godin
September 13, 2014
A U.K. survey found that journalists consumed the most amount of coffee, but that's only the tip of the coffee-related statistics iceberg.
SHOW TRANSCRIPT

When you think of which professionals drink more coffee than anyone else...what comes to mind?

Would it be police officers?

Yup. Well, at least according to a survey by press release distributor Pressat. Journalists and media staff apparently consumed more cups of joe than any other profession.

The survey covered 10,000 people in the United Kingdom, 85 percent of which said they drink at least three cups of coffee a day.

So what’s the cause of this coffee-fueled workday for journalists?

Maybe, as The Huffington Post points out, its the fact that CareerCast found being a newspaper reporter was the worst job in 2013 because of the low pay and high amounts of stress.

Or maybe it's that in 2013 TV and Newspaper reporters were seen as some of the least ethical or honest professions, ranking just below local politicians. At least they came out above members of Congress.

It’s worth noting that Pressat is a press release distributor, so they may have had a pretty large journalist demographic in their survey. That, and their results only covered the U.K.

A 2012 survey by Dunkin’ Donuts and CareerBuilder found that, out of 4,100 U.S. workers surveyed, food prep employees were at the top of the coffee-drinking ladder with journalists down at number six.

A more recent survey by the duo didn’t mention any specifics about professions, but did find 34 percent of U.S. workers felt less productive without coffee — which is quite a big jump from Pressat’s 70 percent who answered the same thing.

While there’s not much data out there to suggest which profession drinks the most coffee worldwide, Quartz collected data in 2014 showing the Netherlands in the lead for actual coffee consumption per person at just under two and a half cups a day. The U.S. ranked way down at number 16.

Regardless of whether its journalists or the Dutch who drink the most coffee, a study done last year by the University of South Carolina found the daily recommended dose of caffeine shouldn’t exceed four cups of coffee a day.

But, *sips coffee* coffee has been linked to more than a couple health benefits such as decreasing the risks of some cancers, possibly protecting against Alzheimer’s disease, and lowering the risk of Type 2 diabetes.