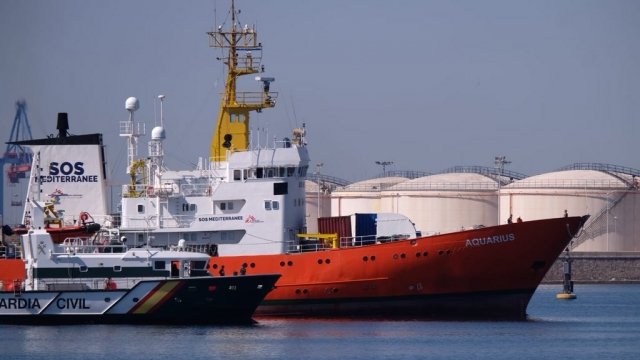 SMS
Ships Carrying More Than 600 Migrants Arrive In Spain
By Katie Cammarata
By Katie Cammarata
June 17, 2018
The Spanish Red Cross tweeted Sunday that it had treated dozens of people and transferred at least 44 to the hospital.
SHOW TRANSCRIPT

More than 600 migrants who were stranded on a ship in the Mediterranean Sea have arrived in Valencia, Spain. That's after Italy refused to let the ship dock a week ago.

As of last week, Doctors Without Borders said among the group were 123 unaccompanied minors, 11 children and seven pregnant women.

They were on board a migrant search-and-rescue ship that's operated by Doctors Without Borders and SOS Méditerranée.

Italy's interior minister is calling for the country to close its ports to migrants. He tweeted last week that everyone in Europe minds their own business, so "now Italy too is raising its head."

Spain's president announced Monday that he would accept the rescue ship on humanitarian grounds. Italy sent out two of its own ships to help with the overcrowding on the rescue vessel. The three ships docked in Spain on Sunday.

The Spanish Red Cross tweeted Sunday that it had treated dozens of people and transferred at least 44 to the hospital.