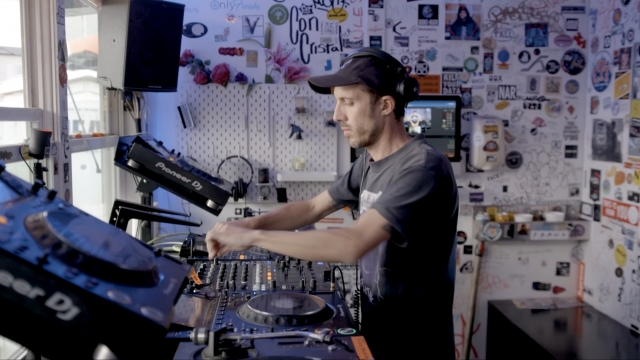 The vibrations of music beats from The Lot Radio are felt under the New York City sunset.

DJ Balam plays from a little studio inside a shipping container.

"We really wanted to be a radio where everybody feels at home," said François Vaxelaire, owner and founder of The Lot Radio.

The venue is not inside a bar or club. The Lot Radio is in a vacant space — a lot.

"It's an internet radio that streams only music," Vaxelaire said.

"One day I was working here, and there was a little abandoned sign saying, 'Ideal for food truck, for lease, blah, blah, blah,' and I was like, 'I think I have a great idea. I think I want to do a radio station," Vaxelaire said.

The Lot Radio streams a continuous list of the most varied music, played by 170 DJs and musicians who volunteer their time.

"There's so many international artists, musicians that are visiting New York every week," Vaxelaire said.

NEWSY'S AXEL TURCIOS: How is the community reacting to the opening of The Lot Radio so far?

FRANÇOIS VAXELAIRE: The people from the neighborhood came, and they were like, 'Oh, what are you doing?' And they were really touched. They were like, 'It's a great idea. We're happy you're doing that.' And now they come for coffee." Anyone can listen to the radio’s lineup from their homes, but by coming to The Lot to hear it live, patrons can support the station by buying drinks and enjoying the space.

On the first Sunday of the month, The Lot Radio hosts a record fair, with records sold by the station’s own DJs.

"For them, it's an occasion to come and make an extra income selling their records," Vaxelaire said. "Some people, it's like their private collection, but some of the people, like him, he owns the label, and he comes and he sells his last. This last release is an incredible label."

Vaxelaire's idea to transform the once empty lot into a music hub of DJs, artists, musicians and locals has influenced similar projects that are now popping up across the country.

In Atlanta, an “off-the-grid” 24-hour streaming radio station is following Vaxelaire’s steps, with a studio built in a shipping container kicking off a nearly three-month experiment this spring.

"You need something like this on the other end of the spectrum where people can just come and play the music that they want to play," said DJ Lloyd, The Lot Radio resident DJ.

TURCIOS: What do you feel when you look at the whole project now after you dreamt it for so long and you see it materialize?

VAXELAIRE: I'm really proud, and I'm really happy. We have it with so many incredible DJs and talent that are part of this project. I'm really thankful.

For many, The Lot Radio is a social hub that connects people regardless of race or background, all through the power of music.