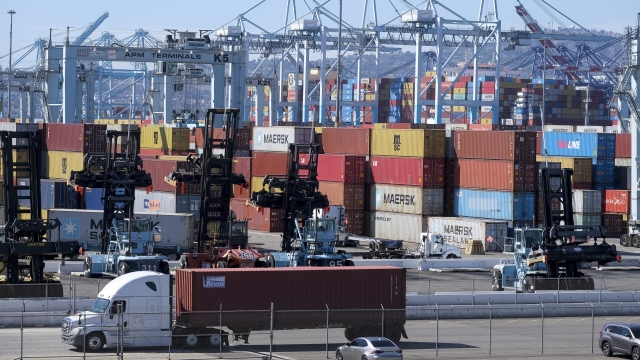 The Los Angeles-Long Beach port complex will begin fining shipping companies if they let cargo containers stack up as the nation's busiest twin harbors deal with an unprecedented backlog of vessels.

About 40% of all shipping containers entering the U.S. come through the Los Angeles and Long Beach ports. The number of ships waiting to unload has risen to record volumes.

As of Friday, there were 153 ships at anchor, berthed or "loitering" — cruising while awaiting dock space — and more than 100 of those were container ships, according to the Marine Exchange of Southern California, which monitors port vessel traffic.

Ships anchored at the complex have well over 500,000 containers on board, officials said. They hold hundreds of millions of dollars worth of toys, electronics, clothing and furniture.

The logjam of ships has interrupted the global supply chain and prompted the Biden administration to allow the port complex to operate 24 hours a day to try to get goods unloaded and out to consumers as the Black Friday and Christmas holiday season approaches.

The average waiting times for cargo to be picked up has doubled in the wake of an import surge partly brought on by the COVID-19 pandemic, which affected traffic from Asian suppliers.