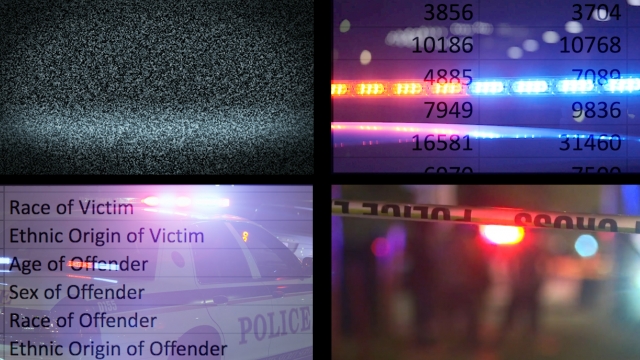 The National Sheriffs' Association and researchers want more action from the FBI to limit loss of key data from a change to the Uniform Crime Report.

Top voices in law enforcement and criminology are worried about an FBI plan that is expected to stop thousands of local police agencies from contributing data on murders, rapes, assaults on police officers and other crimes to the nation's top crime reporting system, the Uniform Crime Report.

The National Sheriffs' Association and American Society of Criminology have separately expressed concern to the FBI about the way the bureau is moving forward as it seeks to overhaul the UCR.

A Newsy investigation this October revealed a quarter of the nation's police agencies are forecast to miss the FBI's January deadline to begin reporting crimes through the bureau's more detailed National Incident Based Reporting System (NIBRS). Those who miss the deadline will not be allowed to continue to report information about new crimes that occur after January 1st, until they eventually join NIBRS, a system that first went online in the late 1980s.

"I find it very troublesome," said Mike Lewis, sheriff of Wicomico County, Maryland, two hours east of Baltimore. "We want a clear, discernible picture of crime going on across this country, especially when it comes to attacks on law enforcement officers."

Lewis said his agency is already a NIBRS reporter, but added he and other sheriffs have for years relied on analyzing crime data from neighboring jurisdictions to help them spot trends and develop better prevention tools in their own communities. If some of those neighboring agencies go dark, Lewis said, his own community could lose important sources of information to compare with.

Lewis also points to a general rise in some violent crimes in 2020, along with what he believes is an increase in assaults on law enforcement officers, as recent developments that he hopes will push the FBI to put more procedures in place to mitigate data loss.

"We are excited about the actual transition but that is concerning because we are going to lose a lot of information," he said.

Agencies who won’t make the FBI’s January deadline include police in Phoenix and San Francisco, who each told Newsy they won't make the deadline. The FBI will not disclose the list of agencies it expects to be impacted.

The National Sheriffs' Association said, after Newsy's story, it reached out directly to the FBI with its concerns and came away unsatisfied with the bureau's transition plans.

Jonathan Thompson, the association's executive director, said FBI officials told the association that police agencies in NIBRS will still publicly disclose the number of assaults on law enforcement officers. However, he said, they confirmed that if an officer is hit in the head with a brick after the deadline, the assault will no longer be counted by the Uniform Crime Report if the deputy or police officer works for a non-NIBRS agency.

National reporting of crime data has taken a plunge, and that could have a big impact on policy decisions that tackle violent crimes.

“We're a bit troubled to say the least that this would be turned off,”  Thompson said. "We need to know what is the interaction that deputies and officers are having with our citizens, good bad or indifferent — because it goes to better outcomes, better crime prevention and better social cooperation."

The American Society of Criminology sent the FBI its own letter outlining concerns in the research community. The letter, sent in late November from ASC's executive board, said its members "are becoming increasingly concerned about the potential disruption of the UCR Program" that could "result in a large number of localities not contributing data or contributing incomplete information for some unknown period of time."

The letter said that resulting "gaps in the data could seriously diminish the ability of our members to conduct research for building theory and developing policy at the national, state and local levels."

The Society made clear in its letter that it supports the move to NIBRS and applauded the FBI for its efforts to transition the nation to the more detailed system. It said, however, "our concern is heightened" because the FBI had not yet communicated the extent of the coming data loss or what steps are being taken to prevent it.

"Users need to be incorporated more into the UCR process," said Dr. Jim Lynch, the current chair of the policy committee for the American Society of Criminology.

Lynch, a former director of the Department of Justice's Bureau of Justice Statistics, said the National Academies of Science have in the past recommended improving the UCR by more direct consultation with key stakeholders outside the law enforcement world who regularly work with crime data. Lynch, a longtime supporter of the shift to the FBI's updated way of reporting crime, said it is not too late for the bureau to bring in external criminologists to help develop strategies to limit loss of the most critical crime data collections for researchers.

"Some of the fixes are going to require remediation," Lynch said.

To address the data gap, the FBI said earlier this fall it would launch “national estimates" of crime to stand in for the lost local data from non-NIBRS participants. Research groups that have for years released state-by-state comparisons on topics requiring more localized information, such as discovering domestic violence hot spots, expressed worry at the time.

The bureau has since said it has, along with BJS, “committed to developing methodology for state estimates” but cautions those are “still under evaluation.” The FBI said that the two agencies will be sharing its plans with the American Society of Criminology and other end data users going forward.

"Given the shift in methodology, both agencies have begun discussions for a comprehensive communication strategy to ensure that users and stakeholders, such as the American Society of Criminology, are kept abreast of the status of the transition and the anticipated estimation methodology," the bureau said in a statement to Newsy.

FBI officials said, in an interview in the fall, assaults on police officers would not be captured in any type of estimate the bureau was at the time preparing. FBI officials did not say if that had changed and did not respond to Newsy's questions about the more recent concerns raised by those in uniform.

"There's so much taking place right now and so much uncertainty in this country, " said Sheriff Lewis. "We can't lose these vital stats."

Mark Greenblatt is senior national investigative correspondent and Mark Fahey is senior data reporter for Newsy and the Scripps Washington Bureau. Follow them @greenblattmark and @marktfahey. Email a story tip to mark.greenblatt@scripps.com or mark.fahey@scripps.com.