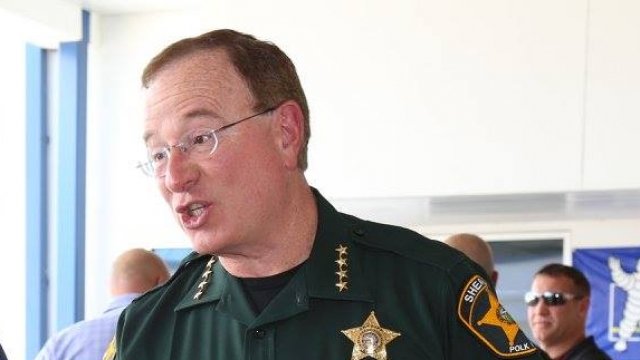 SMS
Florida Sheriff Sued For Checking Warrants At Hurricane Shelters
By Briana Koeneman
By Briana Koeneman
September 12, 2017
Sheriff Grady Judd in Polk County, Florida, was sued after his office threatened to jail anyone with a warrant who sought shelter from the hurricane.
SHOW TRANSCRIPT

Sheriff Grady Judd in Polk County, Florida, got a lot of backlash after his office threatened to jail anyone with a warrant who sought shelter from Hurricane Irma.

And now, he's facing a lawsuit.

The suit was filed Sunday by Virginia-based Nexus Services and one of its employees, Andres Borreno. The company helps people detained by immigration services.

According to NBC News, Borreno was helping undocumented immigrants escape the storm. He went to one shelter in advance to check for space, and that's when Borreno says Judd's deputies demanded a background check before he entered.

Before Hurricane Irma hit Florida, the Polk County Sheriff's Office said in a series of tweets Wednesday that law enforcement officers would check IDs at every emergency shelter.

And one tweet warned, "If you go to a shelter for #Irma and you have a warrant, we'll gladly escort you to the safe and secure shelter called the Polk County Jail."

Not long after the lawsuit was filed, Judd told the Orlando Sentinel the suit is "frivolous" and said he has no plans to change the policy.