Sheriff: It's 'Better Financially' To Kill Suspects Than Wound Them 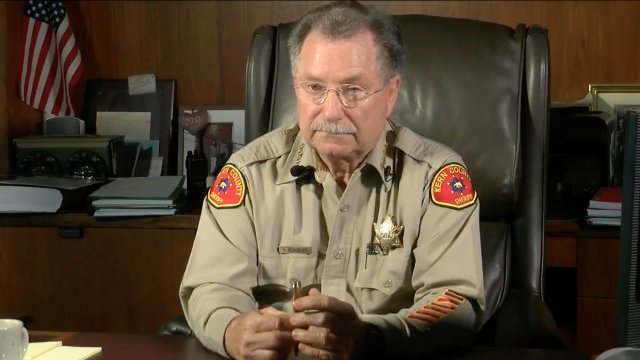 SMS
Sheriff: It's 'Better Financially' To Kill Suspects Than Wound Them
By Jamal Andress
By Jamal Andress
April 11, 2018
Sheriff Donny Youngblood is backtracking after a 12-year-old video of him making the statement was released.
SHOW TRANSCRIPT

A sheriff running for re-election in Kern County, California, is being forced to address some controversial remarks he made on police violence in an old video.

"You know what happens when a guy makes a bad shooting on somebody and kills them? Three million bucks and the family goes away after a long back and forth. ... Which way do you think is better financially — to cripple them or kill them — for the county?" Sheriff Donny Youngblood asks an audience in a video.

"Kill them," an unidentified man answers.

The comments were made 12 years ago while Sheriff Donny Youngblood was speaking to a group of officers during his first campaign for county sheriff.

Youngblood won that campaign and has been the head law enforcement officer in Kern County ever since. He was there in 2015, when the Kern County Sheriff's Office had the highest rate of police killings in the U.S.

Kern County deputies and Bakersfield police killed 13 people in 2015. That's more than the entire New York Police Department, which serves about 10 times as many people and has 23 times as many officers.

After 2015, the department faced investigations from the California attorney general's office and the ACLU. The ACLU ultimately released a report saying there was a "disturbing pattern of shootings, beatings and canine attacks."

As for Youngblood, he says the comments were taken out of context and that he's "never inferred we should shoot to kill." He also mentioned he wished he would have worded his comments differently.