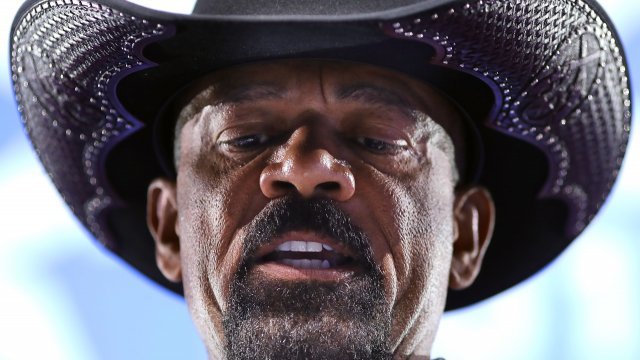 SMS
Sheriff David Clarke's Jail And Its Year Of Constant Controversy
By Jamal Andress
By Jamal Andress
June 30, 2017
Terrill Thomas went seven days without water and lost 30 pounds before dying of thirst. He was just 1 of 4 deaths at Milwaukee County Jail in 2016.
SHOW TRANSCRIPT

In a span of six months in 2016, three people in custody died at the Milwaukee County Jail — as well as a newborn baby. But none of the deaths are like that of Terrill Thomas.

Thomas went seven days without water held up in solitary confinement. He lost over 30 pounds before he died of profound dehydration.

"The routineness of it was the most shocking thing. That everybody just seemed to be able to let it be somebody else's problem," said Milwaukee's Legal Aid Society Litigation Director Pete Koneazny.

Koneazny has worked with the American Civil Liberties Union to monitor conditions at the jail since 2001. Officers at the jail intentionally turned Thomas' water off to discipline him, but they never turned it back on.

"His behaviors was pacing, yelling and singing, talking gibberish, licking the window. ... And, somehow, people could walk by that and not try to figure out something better to do with him than to put him in a punishment cell," Koneazny said.

Thomas' death was the subject of a full investigation called an inquest.

The inquest lets the Milwaukee County district attorney question potential witnesses under oath without any actual charges being filed. Then, a jury makes a recommendation on who should or shouldn't be charged but their decision isn't binding.

"If you do something wrong in the jail, you get moved to the disciplinary unit — even if you're dealing with mental health issues," WTMJ reporter Rikki Mitchell said.

Mitchell sat through the entire inquest process for WTMJ in Milwaukee.

"This inmate said, and there's surveillance video that kind of proves his story because he said that ... he would check on Terrill Thomas. This inmate said that he was on the ground, he was unresponsive, he was naked, he didn't have a mattress. ... He told officers in the jail, 'This guy might be dying; you need to check on him.' And they didn't," Mitchell said.

"So that's the really the dumb thing is that you were punishing or teaching a lesson to someone for whom that made no sense," Koneazny said.

After hearing all the evidence during the inquest, the grand jury recommended charges for seven officers at Milwaukee County Jail. Despite the grand jury's recommendation, nothing is set in stone. The Milwaukee district attorney decides if anyone or no one at the jail should be charged.

And the person in charge of these inmates safety and security is outspoken Sheriff David Clarke. Although Clarke is usually vocal on many issues, he hasn't said much about the state of his jail back home.

The sheriff has mostly shied away from the Thomas case. In his only public statement on Thomas' death, he criticized the media for not reporting what landed Thomas in jail in the first place.

"I do tend to believe that people in positions of power set the tone about what's acceptable and what's not acceptable," civil rights lawyer Theresa Kleinhaus said.

Kleinhaus has been at odds with Clarke's jail on multiple occasions — most recently in a sexual assault case. A jury awarded her client a settlement who was repeatedly raped by a jail guard. 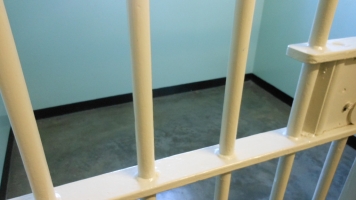 "The feeling she described about that was just the shock of how many more times is this gonna happen, and what do I have to do make it stop," Kleinhaus said.

A former Milwaukee County Jail officer assaulted Kleinhaus' client (whose identity is confidential) five times in custody. Three of those assaults were while the woman was pregnant.

"She is under the complete control of her rapist. ... And in a case like this where someone is raped in a jail, it's hard to understand how it occurs. It's a secure facility. You can't walk into it, I can't walk into it. ... For it to happen five times without detection, I think, makes everyone wonder, 'What's going on with the security and supervision at that facility?'" Kleinhaus said.

A Milwaukee jury sided with Kleinhaus' client to the tune of $6.7 million.

"We consider it a very substantial award," Kleinhaus said. "It's really important for someone who has had a hard life, who's been abused by someone in a position of power, to have seven ordinary citizens hear her testimony and say basically we believe 100 percent."

But it seems the Milwaukee County Jail will have more cases on its plate. Kleinhaus plans to take the jail back to court for shackling pregnant inmates with handcuffs during childbirth. The county is also facing legal action from two of the four inmates' families who died in 2016. As for the boss, he just turned down a job with the Trump administration, saying "his skills could be better utilized to promote the president's agenda in a more aggressive role."

"What's more important, a political moment or protecting the rights of the citizens of Milwaukee County — whether they're incarcerated or not," Kleinhaus said.

Newsy's request for comment from the Milwaukee County Jail was not immediately returned.