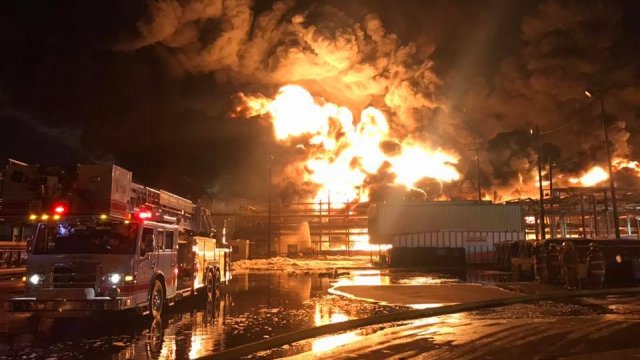 SMS
Shelter-In-Place Lifted After Texas Chemical Fire Affects Air Quality
By Briana Koeneman
By Briana Koeneman
March 21, 2019
Officials issued a shelter-in-place warning for areas near the Intercontinental Terminals Company due to elevated levels of benzene in the air.
SHOW TRANSCRIPT

Officials have lifted a shelter-in-place warning for residents living near a Houston-area petrochemical storage site that went up in flames earlier this week.

The warning was issued Thursday morning for areas near the Intercontinental Terminals Company in Deer Park due to elevated levels of benzene in the air. But a few hours later, officials said air quality readings had significantly improved.

According to the CDC, benzene is a highly flammable liquid with a sweet odor. It can come from volcanoes and forest fires and is also a natural part of crude oil, gasoline and cigarette smoke. But too much contact with benzene can be dangerous. It can cause cells not to work correctly, resulting in anemia or immune system damage. Chronic exposure can even lead to cancer.

The blaze started Sunday and quickly spread to storage tanks containing materials used to make nail polish remover, glues and paint thinner. No serious injuries have been reported as a result of the fire, and the cause is still under investigation.