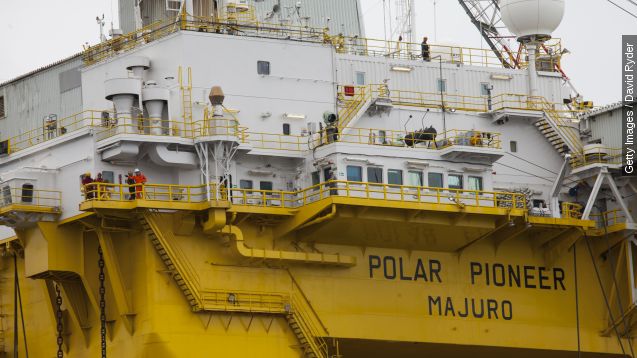 Since at least 2012, multinational oil and gas company Shell has been trying to drill off the coast of Alaska in the Chukchi Sea. And since then, the multibillion-dollar company has encountered problem after problem.

Shell is set to break land in the Chukchi Sea this summer with two 400- and 500-foot-long oil rigs (the Polar Pioneer and the Noble Discoverer), 30 support vessels and seven aircraft.

Back in 2012, Shell tried a similar arctic drilling plan in the Chukchi Sea that went horribly wrong; the company had to rescue more than a dozen workers and two of its rigs ran aground.

According to OilPrice.com, this new venture has cost the oil company upwards of $7 billion to get ready.

And while all signs point to Shell continuing on with its new drilling plan, this go around has also had its roadblocks, the first of which weighs 4,000 pounds and has two very large tusks hanging from its mouth.

The US Fish and Wildlife Service issued a letter to Shell saying the oil company cannot drill with two different rigs simultaneously if the drills are less than 15 miles apart in the Chukchi Sea.

Reason being walruses, polar bears and other marine mammals are known to be sensitive to the sounds of drilling, and drilling also limits the arctic ice available for the animals. (Video via U.S. Geological Survey)

Predictably, Shell has also dealt with protests from environmentalists. When one of its oil rigs bound for Alaska docked in Seattle, a group of protesters in kayaks circled the rig. (Video via KOMO)

And just this week, Shell discovered a gash in one of its support vessels, though Shell says this won't affect its drilling schedule — a schedule that's particularly tight. The company has to do its drilling in the summer before the water freezes over.