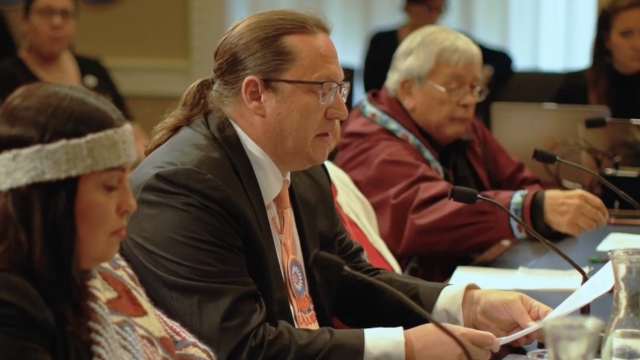 Chief Ben Barnes of the Shawnee Tribe has testified about his people's experiences at boarding schools.

"It's not an academic discussion," Barnes said. "Terrible things happen to people."

The Shawnee Tribe has been investigating the Shawnee Indian Manual Labor school in Fairway, Kansas for over a year.

Now, Barnes' search for answers about how many Shawnee children attended the school and whether there are any unmarked graves there is part of a larger movement.

In 2021, Interior Secretary Deb Haaland launched the Federal Indian Boarding School Initiative to account for the number of boarding schools in the United States, the total cost to operate them and to find any marked and unmarked graves.

There is still so much to be learned.

"It is so, so prevalent, this boarding school experience, and how it affects every Indigenous person," Barnes said. "Every one of us are affected by it, whether we recognize it or not."

This past May, the Department of Interior released their first report.

It found a total of 400 boarding schools operated in 37 states between 1819-1969, and the boarding school system was paid for by selling land that was supposed to be held in trust for Native people.

"...This was the policy to exterminate Indians," Barnes said. "It was part of a genocidal policy. It was about, you know, stealing the wealth of tribal nations, trying to destroy them as a people, destroy them as a coherent community. Seeing that in writing was really important, I think, for all of us. I think all of Indian country needed to see that in writing."

Seeing it in writing is one thing, but the Department also wants to hear from survivors to put faces to the numbers and statistics in the report.

"I remember seeing my mom as she watched six of her eight children being placed on a big, green bus and taken to Fort Totten Indian Boarding school in Fort Totten, North Dakota," said Dr. Ramona Klein, a boarding school survivor and citizen of the Turtle Band of Chippewa. "That image is forever imprinted in my mind and in my heart.”

“I quickly suppressed my desire to speak Inupiaq after witnessing others who were severely beaten when they spoke their language," said James LaBelle, a boarding school survivor and vice president of the National Native American Boarding School Healing Coalition.

Secretary Haaland wants to hear from more survivors, as she travels across the country on what’s known as the Road to Healing.

Barnes and the department are also pushing for federal legislation known as the Truth and Healing Commission on Boarding School policies. They want to investigate schools managed by religious institutions, with the power to subpoena witnesses.

Barnes’ own great grandfather ran away from the Shawnee Indian Manual labor school. The trauma his relatives experienced and that other Indigenous people experienced is one that is passed down through generations.

The Department of Interior will continue with its Road to Healing listening tour, pushing for more money for language revitalization programs for tribal nations and a federal memorial, not an apology, that acknowledges the experiences of those who lived through this system and those who did not.