'Sharknado 2' May Be As Ridiculous (And Popular) As Original 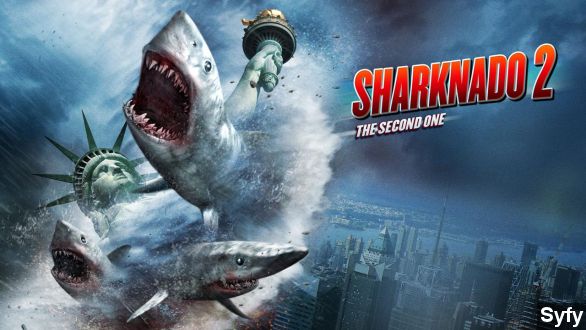 SMS
'Sharknado 2' May Be As Ridiculous (And Popular) As Original

By Matt Moreno
July 29, 2014
One was not enough. "Sharknado: The Second One" debuts on the Syfy channel Wednesday.
SHOW TRANSCRIPT

Get your chainsaws ready because, whether you like it or not, "Sharknado" is back on TV and social media.

SyFy's "Sharknado 2: The Second One", the sequel to the ridiculous "Sharknado" movie, arrives Wednesday. It's, as you might have guessed, about a shark-infested tornado terrorizing New York City. (Via Syfy / 'Sharknado 2')

And the film's reviews are a lot like those for the original — they're pretty horrible. (Via Sioux City Journal | Newsday | Columbus Alive)

For example, as Newsday puts its review, "​For 'Sharknado' fans: B- ... For viewers with highly refined tastes — or any taste — and sharks: F+"

Though, that's not really surprising considering the first "Sharknado" really only gained popularity on social media for its over-the-top, ridiculous, and not-even-close-to-realistic antics. Its creators say viewers can expect more of the same in the second one. (Via Twitter)

And there are certainly those who appreciate the humor in the "intentionally bad" movie. "The Second One" is actually getting positive reviews from some. (Via Mother Nature Network | The Plain Dealer)

Now, as for what you may expect to see — spoiler alert — tons of cameos, notable locations, and plenty of sharks.

Previews of the movie even caught up with sports sites as part of the movie takes place at the New York Mets' Citi Field. It's a rain delay like no other rain delay we've ever seen. (Via USA Today)

If you're interested in watching, or more interested on when to stay off your social media circles, "Sharknado 2: The Second One" premieres on the Syfy channel Wednesday at 9/8c.