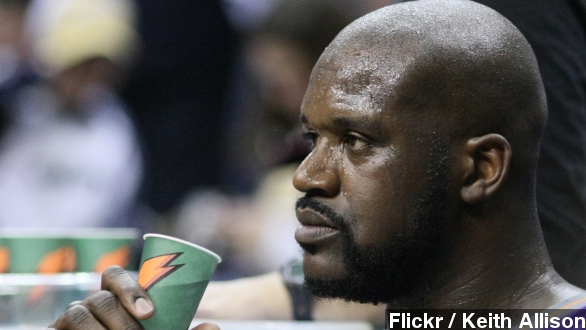 By Matt Moreno
March 25, 2014
The former NBA superstar is accused of "tackle punching" a co-worker on the set of TNT's "Inside the NBA."
SHOW TRANSCRIPT

When you're 7 feet tall and over 300 pounds, it's not exactly easy to "horse around" safely.

Atlanta police are reportedly investigating Shaquille O'Neal for assault after accusations he hit a co-worker on the TNT set where he works as a basketball analyst for the show "Inside the NBA."

The man, Robert Williams, worked as a production employee at TNT. Williams alleges O'Neal "ran out of a room and hit me with a tackle punch to the back knocking me down and falling on top of me injuring my neck and back." (Via ESPN)

One of O'Neal's lawyers sent WSB-TV a statement saying: "This was nothing more than horseplay. No one intended for anyone to get injured."

Williams' lawyer says his client is currently recovering from surgery and his injuries were "not the result of participation in any form of 'horseplay.'"

TMZ says the incident was reported to TNT security, but a police report wasn't filed until July, nearly two months after it happened. O'Neal is currently not being charged with anything.