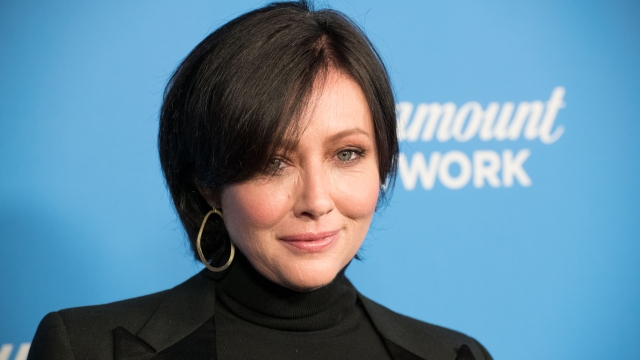 The actress told "Good Morning America" that she chose to share her diagnosis because it would have been made public in an upcoming court battle.

"Beverly Hills, 90210" and "Charmed" star Shannen Doherty has revealed she's battling stage 4 breast cancer after being in remission for years.

The actress first shared the news on "Good Morning America". Doherty says she's been living with the news of her rediagnosis in private for a year.

Doherty was initially diagnosed with breast cancer in 2015. She shared her battle with the disease through posts on Instagram.

This time around, Doherty says the decision to share was forced by a looming trial between her and her home insurance provider. Her California home was damaged in the 2018 Woolsey Fire, and Doherty sued, alleging she'd had to pay out of pocket for things the company was supposed to cover. She says details about her health would have been revealed in court documents.

As those documents are expected to be released within a couple of days, Doherty said she wanted people to hear the news from her so she could control the narrative. Doherty continued working on the reboot series "BH90210" after her diagnosis, and she said she hopes that will inspire others.

She said: "I will have worked 16 hours a day. And people can look at that and be like: 'Oh my god, yeah, she can work. And other people with stage 4 can work, too.' ... Our life doesn't end the minute we get that diagnosis. We still have some living to do."