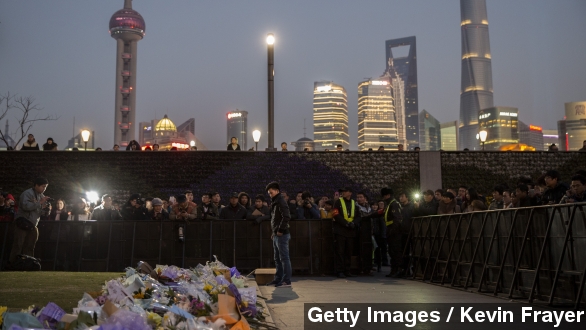 SMS
Shanghai Stampede Victims' Families Say Police Let Them Down
By Madison Burke
By Madison Burke
January 1, 2015
Friends and family say they've been kept from their injured loved ones or weren't told of their deaths following Wednesday's stampede.
SHOW TRANSCRIPT

As the numbers of injuries and deaths resulting from the Shanghai stampede continue to rise, the victims' friends and families are starting to say the authorities let them down.

What led to the stampede has not been confirmed, but originally it was reported either money or coupons thrown into the crowd started the commotion.

The stampede took place late Wednesday when dozens were trampled at a New Year's Eve celebration. Reports now say 47 were injured and 36 were killed. (Video via Youku / The Paper)

There are also reports that the loved ones of hospitalized victims were barred from entering hospital after the victims were first admitted, with claims that police were physically blocking the hospital doors with a bench.

And some victims' relatives are complaining they were never notified about their loved ones' deaths and that authorities were unhelpful in the effort to identify bodies. (Video via CCTV)

On Thursday, large crowds gathered in Shanghai to lay down flowers and remember those who were killed or injured.

The Chinese government says authorities are still investigating the cause of the stampede.